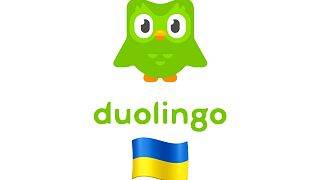 The number of language learners taking up Ukrainian has skyrocketed this year   -   Copyright  Duolingo
By Euronews  with Reuters  •  Updated: 06/12/2022

Language learning app Duolingo Inc have stated that over 1.3 million people took up Ukrainian as a language to learn after the Russian invasion of Ukraine in February in a show of solidarity.

The report said people studying Ukrainian in Germany and Poland rose over 1,600% compared to last year. The company added that the growth of Ukrainian learners in the United Kingdom propelled it up 20 places to 17th position in the most popular languages.

Ukrainian was also the fastest-growing in countries far from the conflict such as Argentina, Vietnam and Japan, it said. Ireland topped the list of countries with the largest growth in people studying Ukrainian.

Interest in Ukrainian surged in the first few weeks after tensions began and peaked in late March, but was steady through the rest of the year.

Meanwhile, Ukrainians also sought to learn languages such as German and English as the situation displaced millions.