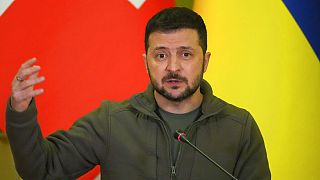 Many Ukrainians are making a concerted choice to wear khaki like President Volodomyr Zelenskyy   -   Copyright  Efrem Lukatsky/Copyright 2022 The AP
By Jonny Walfisz  with AFP  •  Updated: 11/11/2022

It’s rare these days that the leader of a country will be widely seen as a sartorial influence. After all, the days of fashion trends being started by designers of royal clothing are long gone.

Leave it to Volodymyr Zelenskyy to buck the trends though.

Since the beginning of Russia’s brutal invasion of Ukraine, the Ukrainian president has been seen in pretty much just one outfit, military fatigues.

As his country braces for the fighting to endure over the winter in a war that has already lasted eight months, military-inspired items have become a standard of dress for many people.

But Zelenskyy has made a fashion point of the military wares.

In times when he could have worn a more traditional suit, he’s opted for olive t-shirts, khaki fleeces and cargo trousers.

It’s all part of the president’s singular media campaign. Never let the rest of the world forget Russia’s aggression.

Ukraine is at war, and Zelenskyy knows how imperative to his nation’s success the support of foreign nations is. Keeping war as the central theme of everything he does, including his clothing, is key to keeping that message to Europe clear.

“They say: ‘my country is fighting and I am wearing the same thing as people who go down to underground shelters’,” Solovey adds.

It’s not just Zelenskyy donning the military greens though, the whole country has found the style infectious.

“Many people have started to wear khaki clothes associated with the army, which allows us not to forget what happens and help in our own way," says Denys, 30, real estate agent in Kyiv wearing a khaki designer jacket.

“Khaki has always been a popular colour in Ukraine, in casual or outdoor clothing. But now more than a style, it is the visual identity of an entire nation at war," says Solovey.

In 2014, when Russia first annexed Crimea, the blue and yellow national trident became a symbol of resistance worn by the people. But military looks aren’t the only war-themed fashion trend to emerge in the beleaguered state.

People have started wearing more traditional Ukrainian outfits as part of a campaign to prove Putin’s assertions wrong of Ukraine’s lack of identity.

“As long as Russia repeats that there is no Ukrainian nation, language and identity, we will defend our culture and heritage, it is part of this battle," concludes Solovey.

The race to digitise Ukrainian cultural and historical archives