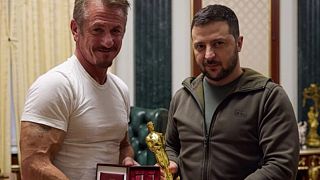 Ukrainian President Volodymyr Zelenskyy met with American actor and director Sean Penn in Kyiv, who gave him his Oscar statue as a symbolic gesture of support and a "symbol of faith" in Ukraine's victory over Russia.

“This is for you. It’s just a symbolic silly thing, but if I know this is here then I’ll feel better and strong enough for the fights,” Penn told Zelenskyy. “When you win, bring it back to Malibu, because I’ll feel much better knowing there’s a piece of me here.”

Zelenskyy said he will keep Penn's Oscar statue, saying it's "such a great honor, but until we win."

The exchange was featured in a video shared by Anton Gerashchenko, advisor to the minister of internal affairs of Ukraine.

Zelenskyy then presented Sean Penn with the Order of Merit, honoring Penn's contribution in supporting Ukraine. Penn’s name is now featured in a commemorative plaque dedicated to the actor. His name features next to the list of many world leaders who have helped Ukraine during the conflict.

Penn was one of the first people who visited Ukraine after Russian troops moved into the country and has been an outspoken supporter during the military conflict.

The actor, like many other celebrities, has met with President Zelenskyy on several occasions. He had visited Ukraine prior to the war in November 2021 for his planned documentary on the country.

His efforts, noble as they are, have often run the risk of being interpreted as overly earnest and self-indulgent, especially when Penn vowed to “smelt” his Oscars in public if Zelenskyy wasn’t invited to speak during the telecast of the Oscars ceremony in March.

Passionate support for some, performative hectoring for others.

But while there is plenty of cynicism regarding the involvement of Hollywood A-listers, Zelenskyy has been outspoken about gathering international support for his country on several platforms. His outreach strategy continues to show that the former comedian-turned-president is someone who understands how celebrity status can be utilized in order to yield concrete results, how these meetings can raise awareness, and how the wider public interacts with global events.

Khaki is the colour for Ukrainians showing support for military troops