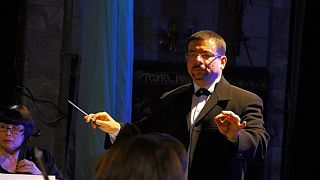 A Ukrainian musician has been killed by Russian troops for refusing to take part in a concert in the occupied region of Kherson.

Yurii Kerpatenko, the renowned and principal conductor at the Kherson Music and Drama Theatre, was shot dead in his home after he “categorically refused to cooperate with the occupants”, a statement from Ukraine’s culture ministry said.

The ministry first became aware of the killing on October 14.

A “festive concert” had been organised by occupiers and some local orchestra members to “demonstrate the so-called ‘improvement of peaceful life’ in Kherson,” said the statement.

“We express our deepest condolences to Yuri's loved ones and colleagues. Eternal memory.”

The U.K.-based Finnish-Ukrainian conductor Dalia Stasevska was among the first musicians to respond to news of the killing on social media.

Stasevska told The Guardian that "the history of Russia imposing a 'comply or die' policy against artists is nothing new. It has a history which spans for hundred of years."

"I have seen too much silence from Russian colleagues," she added. "Would this be the time for Russian musicians, especially those living and working abroad, to finally step up and take a stand against the Russian regime's actions in Ukraine?"

Bernard-Henri Lévy, the French author, stated that this was “crime against art” and “therefore against humanity.”

“It is absolutely terrifying,” said chief stage director of Kyiv’s National Opera of Ukraine, Anatoliy Solovianenko. “Whether he was a doctor, or a worker, or an artist, it makes no difference. He was a human, and he refused to comply.”

Khaki is the colour for Ukrainians showing support for military troops

Russian pop diva who denounced war says she is in Israel