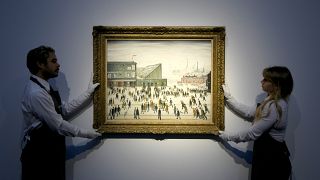 One of LS Lowry’s most iconic paintings has just sold for a record amount.

‘Going to the Match’ is perhaps the most recognisable of Laurence Stephen Lowry’s paintings. The 1953 painting was sold for a total of £7.8m (€8.9m), a record for Lowry’s works.

The artist was known for his depictions of industrial life in the North West of England during the 20th century.

In Going to the Match football fans depicted in Lowry’s trademark stick-figure side crowd toward a packed Bolton Wanderers football stadium.

It’s one of the definitive images of working class appreciation for football in the UK.

Yesterday, the Lowry Art Gallery in Manchester, UK successfully bid for the painting at a Christie’s auction in London. The painting has been hanging in the gallery since 2000, but did not belong to the establishment.

Instead, Going to the Match was owned by the Professional Footballers Association (PFA). The PFA acquired the painting in 1999 but the history of the organisation and the painting goes back to its origin.

In 1953, Lowry lived in Salford, near the Bolton Wanderers’ then stadium in Burnden Park. His depiction of the pre-match atmosphere won first prize in a competition that same year run by the PFA.

The PFA put the painting up for sale this year due to the rising pressures of the financial crisis. With the placement of Going to the Match in the Lowry Art Gallery’s collection at risk, the mayor of Salford, Paul Dennett insisted it should remain “free to access”.

Dennett started a public campaign to keep the painting in the public’s hands.

“LS Lowry, Salford’s greatest and most iconic artist, made his name depicting working-class life – as such we emphatically believed Going to the Match should remain on public view free to access where everyone can see it,” he said.

The gallery was able to make the astronomical bid - £6.6m with a buyer’s premium of £1.2m - thanks to a donation from the Law Family Charitable Foundation.

Estimates for the sale ranged from £5m to £8m.

On the successful bid, Dennett went on to say, “I am delighted our campaign to save this critical and important painting has successfully resulted in The Lowry securing it tonight, for the city of Salford in perpetuity for generations to come, for residents and visitors to our great City.”

The importance of publicly accessible art was also raised in August around Frida Kahlo’s ‘Diego y yo’. Bought for a record-breaking €30.8 million in 2021, the important painting in the Mexican artist’s oeuvre was put on public display for the first time in more than 20 years thanks to the sale.

How much would you pay for a Spider-Man comic book?