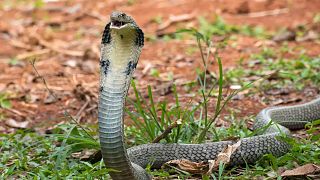 Stockholm has one thing less to be scared about this Halloween...

After a 2.2 meter venomous king cobra, named Sir Vass (Sir Hiss) escaped from its home in a Swedish zoo one week ago, the snake has returned home by itself.

“Houdini, as we named him, has crawled back into his terrarium,” CEO Jonas Wahlstrom of the Skansen Aquarium told the Swedish public broadcaster SVT.

Shame they didn’t go with Abradacobra...

The deadly snake escaped on 22 October via a light fixture in the ceiling of its glass enclosure at the aquarium, part of the zoo at the Skansen open-air museum and park on Stockholm’s Djurgarden island.

As a result of an intensive search with X-ray machines, “Houdini” was located last week in a confined space near the terrarium in the insulation between two walls. Holes were drilled into the walls where the snake was hiding but the cobra managed to disappear from the view of the X-ray cameras.

And now, it has slithered home, giving up its freedom to return to its terrarium.

“It was too stressful for Houdini with all the holes in the walls, so he wanted to go home again,” Wahlstrom told SVT.

The park said the snake wouldn’t have survived the cold climate if had gotten out of the building.

Just to give you a quick chill (it is Halloween after all), king cobras can grow up to 5.5 meters long and their far from hisssssterical venom is a deadly neurotoxin that directly affects the nervous system of a human or animal – mere ounces can lead to death within minutes.

No wonder a group of cobras is called a quiver...