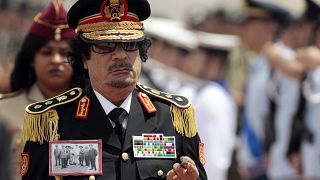 A multimedia artwork by Italian artist Alessandra Ferrini, titled "Gadhafi in Rome: Notes for a Film", has clinched this year's MAXXI Bulgari Prize.

The video installation is inspired by the late Libyan leader Moammar Gadhafi's visit to Italy in 2009, to celebrate the signing of the Treaty of Friendship, Partnership and Cooperation between Italy and Libya.

"I was intrigued at how the three days (of Gadhafi's visit) sort of followed a similar pattern to the three act structure from playwrights," says Ferrini.

According to the exhibition's curator Giulia Ferracci, the work can be "interpreted as an artistic test aimed at reflecting on colonial trauma, denouncing the manipulation of colonial and anti-colonial history and moving beyond to reflect on the present.”

What is the MAXXI Bulgari Prize?

The MAXXI Bvlgari Prize is a biennale award, hosted by the Italian National Museum of Contemporary Art and Architecture, and the Italian jewellery and luxury goods brand Bulgari Group, which aims to promote and encourage the growth of the younger generation of artists.

Each year three finalists are selected by an international jury made up of highly prestigious curators and cultural directors.

The winner’s work gets acquired by the MAXXI museum and becomes a part of its permanent collection.

Ferrini received her prize at a special ceremony on Tuesday 25 October, at the MAXXI Museum of Rome.

"I think she developed a very particular, personal perspective in the research of social history, geopolitical history, which is not only very significant for the time now but also has a strong consistency," said Hou Hanru, Artistic Director of MAXXI and president of the international jury.

"She's been able to develop a very strong multimedia language around this, and it shows particularly importance in terms not only the aesthetic but also of cultural relevance," he added.

Who are the other finalists?

One of the other finalists is Silvia Ross, an Italian Italian-Togolese artist who uses photography to understand how we remember and why we forget.

Her collection is called "Teacher Don't Teach Me Nonsense", which she explains is "the title of a Fela Kuti album, in which the artist talks about this strong Western influence in the school education process of many West African countries."

"I found it a good title because it denounces this Western influence but it also hopes for a teaching of African traditions and cultures," she said.

Her videos and photographs address her family history and identity heritage.

Rosi's work, composed of three groups of photographs and videos, also highlights the importance of language to the identity of a population and individuals, particularly the Ewe and Minà languages, once spoken in Ghana and Togo.

The third finalist is Namsal Siedleckl with his work "Nuovo Vuoto - (New Emptiness)", inspired by the empty spaces within bronze sculptures.

The collection consists of six sculptures of a human hand, each with different materials.

Starting from a bronze hand purchased online, Siedleckl began to search for the "original sculpture" once contained within it.

"All bronze (sculptures) are empty. This thing was fascinating me and as the process gradually developed, this comeback (represents) what we lost, what we should rediscover. In this case we lost the bronze, that somehow represents what we were, our primordial existence as a species, of coexistence and balance," says Siedleckl.

The works of the three artists will be on show until 22 November 2022 at the MAXXI Museum of Rome.

No TikTok: Sacred sites in Nepal start to ban the video-sharing app

The South African artist bringing down barriers with creativity

Does art made by an AI have aesthetic worth?