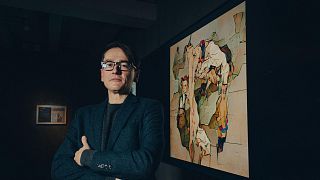 “Botto has become this hybrid being which is half AI and half a collective intelligence, which is also kind of like a virtual being,” Mario Klingemann says of his AI art generating project.

The German artist is very ambitious when it comes to his AI artist collaborator.

He’s not the only one. AI art is everywhere these days.

The likes of DALL-E 2, WOMBO Dream, Midjourney and Stable Diffusion have given people at home access to AI generators to make funny internet content like Kermit the Frog as Edvard Munch’s ‘The Scream’.

But as AI generated art proliferates, so too do the questions around it.

In August, a painting generated by Midjourney won first prize in the digital art category at the Colorado State Fair. This month, the Dune subreddit banned AI-generated art as “low-effort content”.

Now, Botto's works are to be shown at Downstairs at the Department Store, Brixton from 26 to 30 October.

For Botto, a project created in 2021, Klingemann wanted not just to create art, but also to decentralise it.

Every week, Botto designed 350 new paintings through its suite of open-source algorithms that can then bring together elements of images from an almost infinite online bank. These paintings are the result of Klingemann inputting varied prompts to Botto.

It’s in Klingemann’s prompts that his hand as an artist is most present. But he doesn’t want it to be. Instead, Klingemann has fed Botto neutral terms to kick-start the generation process; he then stood back to let a community interact with the AI.

This is why Klingemann’s Botto project is not just about generation. With each week’s 350 paintings, a community votes online for their favourite one.

The NFT of the winner is then auctioned off.

“Botto gets a dictionary of all words in the English language,” Klingemann explains. “It first will use them randomly, but then over time with the votes coming in, certain words that created more interesting imagery that the community likes will get a higher probability to get picked.”

“So in the end, there will be almost a ranking of words that worked well in the past, which gets more chances to get used again, and others that didn't succeed will not be used as often,” Klingemann says.

There’s clearly huge money at play with Botto and the artworks it has created. On a purely financial level, it makes sense that Klingemann has put the auction and community aspect into the process itself.

“Botto has to pay for its own living costs,” Klingemann admits openly. He notes server costs and the large team he has helping him run and develop the system.

But beyond just running the ship, the votes are part of his artistic philosophy with Botto.

“My overarching idea is that Botto becomes its own entity,” Klingemann says.

In AI art’s current status, it will always be affected by the inputs it is given. Klingemann could put his own niche spin on the inputs, but that would then make it too much an extension of himself.

“I'm more interested in the dynamics of what makes an artist,” he says. “That’s not only about producing images, but also how people talk about it and where it gets shown,” he says. “So actually the whole makeup of the system is almost more important than what it creates in my eyes.”

The artistic value of AI art

What Botto is creating are varied works that borrow from the artistic canon, ranging from renaissance to contemporary, all with a recognisable AI generation fingerprint.

Faces blur into unrecognisable, objects are never defined and background bleeds into foreground. Always the touches of a non-human entity are clearly marked.

What are the artistic qualities of these artworks then? In many ways, Botto’s creations are a more direct interaction with the art market.

Before, a financially successful artist may have kowtowed to the art market’s interests, but always merely hoped that they stayed afloat with fickle changes. Botto can instead adjust according to a far grander set of variables, producing more works in a week than any human could possibly hope to.

Is this the work of an AI artist, in that the works have artistic value beyond their literal value? That’s less clear.

Klingemann is comfortable admitting he doesn’t always like the works, and also that there is a benefit to leaning into market interests.

“Usually, the edgier you are the less fans you have,” Klingemann says.

“You might have more respect among your peers, but at the same time, your collector base will also be limited to people with very special and particular tastes.”

Where is the value in the art for art’s sake?

Klingemann argues that there is still an aesthetic value in what Botto is creating.

While much of the canon of contemporary artists’ works take into account their intention behind the piece, that’s not possible with a non-sentient creator. Instead, the value comes from elsewhere.

“Maybe intention is just a part of a story. I'm very much into the story that the artist and the audience tells themselves about the artist. So it's an emerging story,” Klingemann explains.

That story is then put to an audience. Klingemann is interested chiefly in how the audience reacts and creates that story from Botto’s work. This isn’t a profit-driven venture for him, as he remains fascinated by the question of Botto’s artistic value.

“It boils down to our love of stories. And so, if I look at Botto’s art, I see that. We have an interesting story that has emerged there which seems to be interesting to people.”

Botto: a Whole Year of Co-Creation" runs from 26 to 30 October at Downstairs at the Department Store, Brixton.

National tribute to be held for French painter Pierre Soulages