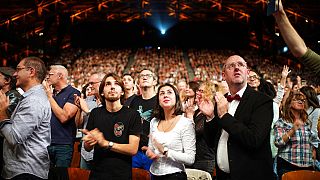 Lyon welcomed back the acclaimed Lumière Film Festival on Saturday with a bang!

Since its creation in 2009, the festival pays tribute to the history of cinema and those who have dedicated their lives to the art and craft of film.

The central south-eastern French city is home to the Lumière brothers’ studio. The pair are often credited with inventing cinematography. On the 19th of March 1895, in the Monplaisir district in Lyon, Louis and Auguste Lumière set up their studio. They shot the first film in the history of cinema: La Sortie des usines Lumière.

The brothers are hailed for advancing cinematic production. The two figured out ways of, in particular, film perforations which is the process of putting frames onto rolls of film. This in turn led to the development of the film camera, which could be processed and run through a projector.

The road it was shot on, Chemin Saint-Victor, became the rue du Premier-Film in 1925, and, since 1982, the Institut Lumière, Lyon's film library. Today it welcomes film lovers from all over the world.

On Saturday evening, 5,000 spectators gathered for the festival's opening in the Halle Tony Garnier. Launching the event was the film L'Innocent, directed by and starring Louis Garrel. His film was also shot in Lyon.

L'Innocent was part of the official selection at this year's Cannes film festival – a rare achievement for a comedy ... no less so a heist-comedy!

The film follows Sylvie (played by Anouk Grinberg), a drama teacher in a prison. Sylvie falls in love with one of the inmates, Michel (Roschdy Zem) who is behind bars for his role in a heist. Her son Abel (Louis Garrel) attends the wedding. Not too happy about the arrangement, Abel feels compelled to protect his mother from Michel, who he can't help but view as a mere criminal.

Garrel is not only one of the great contemporary French actors, but also a filmmaker well-versed in cinema history, and to which he pays tribute in his film.

"I thought a lot about Italian cinema, you could think about romantic comedy, also French, also from the 50s, even Howard Hawks. Films are always in dialogue, so watching a film is also a journey, strangely, with films from the past,” Garrel told Euronews.

Many world-famous directors were present for Saturday’s opening night. Including South Korean filmmaker Lee Chang-Dong. He has directed acclaimed films such as Green Fish, Peppermint Candy and Oasis.

Speaking to Euronews Culture, he said "I'm very happy to be here because it's such a historical place, the birthplace of cinema. I'm very happy to participate and to be one of the guests of honour of this festival.”

Nearly 500 screenings are scheduled during the festival, which runs until the 23rd of October.