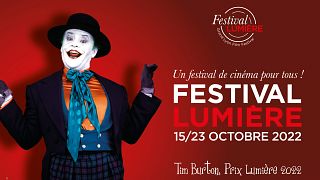 The Festival Lumière is back, honouring Tim Burton as the recipient of this year's coveted Lumière Prize   -   Copyright  Festival Lumiere   -
By David Mouriquand  •  Updated: 13/10/2022

The 2022 Lumière Festival kicks off in Lyon this weekend, from Saturday 15 - Sunday 23 October... And this year’s vintage looks mighty good.

Since its creation in 2009, the festival has become an unmissable event for film lovers. This year’s 14th edition is no different and celebrates the work of Tim Burton, who is the recipient of the prestigious Lumière Prize.

The American filmmaker will see 17 of his films screened, and joins the ranks of previous illustrious winners such as Clint Eastwood, Martin Scorsese, Wong Kar-wai, Jane Fonda and last year’s prizewinner, the wonderful Jane Campion, who received the award from the equally wonderful Julia Ducournau.

Not that Burton will be making the trip to Lyon on his lonesome, as several prestigious guests are arriving in the capital of cinema this year.

These include Oscar-winners Guillermo del Toro (Pan’s Labyrinth, The Shape of Water) and Alejandro González Iñárritu (Birdman, The Revenant), who will present his new film Bardo at the festival.

Usually for film festival previews, it’s relatively easy to single out a select few recommendations form a line-up, but Festival Lumière has once again made it a blissful nightmare, with their labyrinthine program spoiling the expected 200,000 punters when it comes to screenings, workshops, master-classes and special events. Over the course of nine days in over 6o venues, around 425 screenings will take place, striking the perfect balance between eagerly-awaited 2022 big hitters and a rich selection of heritage films.

Daunting though the task may be, Euronews Culture have got you covered with some tips...

The diverse program does feature some attention-grabbing hot tickets, namely an alluring selection of premieres.

Guillermo del Toro will present his take on Pinocchio, a stop-motion fantasy inspired by Carlo Collodi’s dark fable about the fibbing wooden puppet that should banish saccharine and soulless flashbacks of the other Pinocchio film released this year on Disney+.

Valeria Bruni Tedeschi is showing her film Les Amandiers, Emily Atef debuts Plus Que Jamais, and Sebastián Lelio (Gloria, A Fantastic Woman) will present his new film The Wonder. The Chilean director sets his film in 19th-century Ireland to tell a domestic psychodrama about religious faith battling against scientific reason, all wrapped up with tantalizing hints of gothic horror. Adapted from Emma Donoghue’s novel and starring the ever-captivating Florence Pugh, this is one gem this year that shouldn't be skipped.

Oh, and there’s this little-known up-and-comer who’s bringing this new project to the festival, a certain Steven Spielberg.

The Beard’s new film, The Fablemans, premiered last month at the Toronto International Film Festival and is a semi-autobiographical tale loosely based on the filmmaker’s early life. It’s already being praised as a heartwarming ode to moviemaking and stands a good chance when it comes to awards season next year. Lucky ticket holders on Tuesday 18 will be able to catch the film before its release in European cinemas next year.

Elsewhere, there are too many standout events and screenings to mention.

And for the diehard cinephiles amongst you, there’s the 4th “Salon du DVD”, the DVD market at the festival village (every day from 10:30 to 21:00), the workshops on the history of cinema and the secrets of cinema, as well as the exhibition on Louise Malle film posters – best of all, these events are all free.

Get thee to Lyon, make your picks, and feel free to follow Euronews Culture’s example by over-excitedly booking one film for every day of the festival.