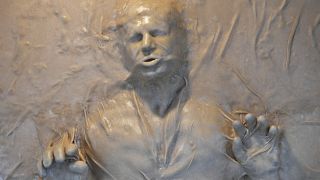 Han Solo may have fought off Stormtroopers, but “Pan Solo" has to deal with Sconetroopers.

A pun-tastic bakery in the San Francisco Bay Area has dubbed its 6-foot (1.8 meter) bread sculpture of the Star Wars character “Pan Solo” as he appeared after being frozen in carbonite in The Empire Strikes Back.

Hannalee Pervan and her mother, Catherine Pervan, co-owners of One House Bakery in Benicia, California, spent weeks molding, baking and assembling the life-sized sculpture using two types of dough, including a type of yeastless dough with a higher sugar content that will last longer.

The lovingly crafted details show Han Solo's anguished face and his hands straining to reach out.

Hannalee said she might have gotten a bit obsessed.

“Mom made me leave it because I was obsessing over the lips,” she told the New York Times. “She was like, ‘You need to walk away.’”

Creating Pan Solo was particularly meaningful for her because she contracted COVID-19 in January 2021 and lost much of her senses of smell and taste.

“So just to find joy in a different part of food is really important,” she said.

The sculpture is now on display outside of the bakery, located about a half-hour's drive north of San Francisco.

The public will get to vote on their favorites from among more than two dozen creations entered by local businesses.

The Pervans made their first entry for the Street Scarecrow Contest in 2019 - a White Walker and an iron throne made of baguettes instead of swords, both homages to the HBO show Game of Thrones, which the Pervans redubbed “Game of Scones.”

Their sophomore effort included a nod to The Mandalorian (or: “The Pan-dough-lorian”), which included “Baby Dough-da”. Last year, the duo made a Loki-themed breadigator last year called “Dough-ki.”

Nevermind though… There’s always time for a Luke Ryewalker… Or maybe a Millennium Falcnaan?