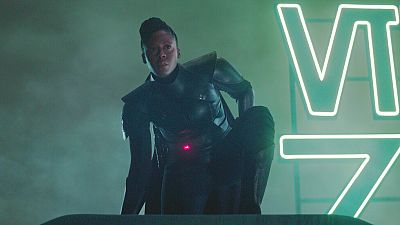 The Star Wars franchise has thrown its support behind Obi-Wan Kenobi actor Moses Ingram after she revealed “hundreds” of racist messages she had received on social media.

Ingram, who plays the Third Sister Reva Sevander in the new Disney+ spin-off series, called out the racist abuse in a since expired post on Instagram.

“There’s nothing anybody can do to stop this hate,” she said. “The thing that bothers me is this feeling that I’ve had inside of myself, which no one has told me, but this feeling of like: I just got to shut up and take it,” Ingram said.

“I’m not built like that. So I really just wanted to come on and say thank you to the people who show up for me in the comments, in the places that I’m not going to put myself. And to the rest of y’all, y’all weird.”

Ingram posted a subsequent Instagram story, saying: “The love is louder. It overflows. Thank you.”

The show’s lead actor Ewan McGregor, who is also executive producer of the Disney+ series, condemned the “horrendous” abuse received by Ingram.

“It seems that some of the fan base from this influential fan base have decided to attack Moses Ingram online, and send her the most horrendous, racist DMs,” McGregor said in a video shared by the official Obi-Wan Kenobi Twitter account on Wednesday.

“I heard some of them this morning, and it just broke my heart.”

Calling Ingram a “brilliant actor” who brings “so much to the franchise”, he added that “it just sickens me to my stomach to hear that this has been happening”.

“I just want to say as the leading actor in the series, as the executive producer on the series, that we stand with Moses. We love Moses,” McGregor said.

“And if you’re sending her bullying messages, you’re no Star Wars fan in my mind. There’s no place for racism in this world. And I totally stand with Moses.”

“There are more than 20 million sentient species in the Star Wars galaxy, don’t choose to be a racist,” it tweeted on Tuesday.

“We are proud to welcome Moses Ingram to the Star Wars family and excited for Reva’s story to unfold. If anyone intends to make her feel in any way unwelcome, we have only one thing to say: we resist," it added.

Obi-Wan Kenobi is the latest series in the ever-growing Star Wars franchise.