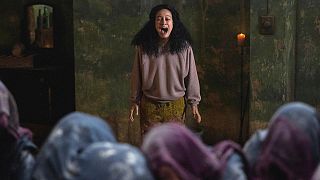 Then proceed with caution.

The first episode of the new Netflix series The Midnight Club has broken a world record for jump scares.

The show comes from co-creator Mike Flanagan, whose previous Netflix projects include The Haunting of Hill House, its follow-up The Haunting of Bly Manor, and 2021’s Midnight Mass. Flanagan also directed the adaptation of Stephen King’s sequel to The Shining, titled Doctor Sleep.

After the 10-episode show debuted on Friday (7 October), its first episode, "The Final Chapter”, has been named by the Guinness Book Of World Records as the single television episode with the most amount of jump scares. It clocks in 21 in rapid, borderline non-stop succession.

Flanagan told Deadline in a statement: “I thought, ‘We’re going to do all of them at once, and then if we do it right, a jump scare will be rendered meaningless for the rest of the series.’ It’ll just destroy it. Kill it finally until it’s dead, But that didn’t happen. They were like, ‘Great! More [scares]!’”

The irony being that Flanagan has been vocal about his hatred of the jump scare technique.

“My whole career I completely shit on jump scares as a concept, and I wanted to make sure it was pinned to me, too, as much as it is to the show, to Netflix, and all of us who have inflicted this on everyone,” said Flanagan in the same interview.

“Now, I have my name in the Guinness Book of World Records for jump scares, which means next time I get the note, I can say, ‘You know, as the current world record holder for jump scares, I don’t think we need one here.’”

The Midnight Club is based on the popular book series by Christopher Pike and focuses on terminally ill teens at a mysterious hospice, Brightcliffe Hospice Care for Teenagers. There, they form the titular club and meet every night to tell each other sinister stories. They also agree to a pact that whoever dies first will try to come back to tell the others if there is an afterlife. Think about it as the book club from hell, and as you can imagine, those sweet condemned raviolis didn’t think about it too long or hard - even a casual horror fan can tell you that with a set-up that ominous, none of this will end well.

What is a jump scare and why do they get such a bad rep?

Anyone who has ever seen a horror movie has experienced a jump scare.

It’s when something suddenly appears on screen, reaching out of nowhere to shock you. They are usually prefaced by quiet and then a sudden obnoxious sound effect that will have you jumping out of your seat. And perhaps your skin.

The momentarily effective tactic is good for a quick adrenaline rush, but it can’t be denied that the jump scare finds itself at the intersection between being startled and actually being scared.

Jump scares are too often used for instant shock value and because so many recent horror films rely on them too heavily, they feel cheap, unearned and even predictable. This renders the scare as nothing more than a cattle prod tactic that too frequently bypasses character and plot within the film (or series), as well as the viewer’s sense of internal logic, as it works purely on reflexes and people’s startle response.

The moment ends up feeling like a get-out alternative when a filmmaker can’t come up with a more creative scare.

Still, as much as ubiquity in modern horror has given the jump scare a bad reputation, some horror movies know how to effectively use the technique to properly scare, as opposed to temporarily startle. Like all maligned tropes, there are some redeeming ones that show there is an art to perfecting a calibrated jump scare. Ultimately, and much like comedy, it comes down to the need for a proper set-up, timing, and a merited pay-off.

Here are a few examples of the ones that got it just right.

Alice (Jane Randolph) has been flirting with her married coworker Oliver (Kent Smith). The snag is that Oliver’s wife, Irena (Simone Simon) knows and also claims she transforms into a panther whenever in the throes of passion or jealousy. As you do.

After a date with Oliver, Alice walks home in empty and silent streets. She fears she’s being followed and the audience start to hear the hiss of a cat-like creature about to pounce on her prey. Instead, it’s the bus’ air-brakes as it stops.

This scene has been widely credited as being the first real jump scare, to the extent the technique was referred to as the Lewton Bus (a reference to producer Val Lewton’s involvement in crafting this scare). The reason it works so well is that the slow build up of tension and the non-threat resolution wrongfoots the audience. It’s a moment that has influenced countless other filmmakers.

There’s arguably no horror scene as iconic as the famous moment when Marion Crane (Janet Leigh) dies in the shower to the sound of screaming violins in Alfred Hitchcock’s Psycho. It’s a scene that has had a massive influence on the horror genre and a perfect example of less-is-more, as not that much is shown for the sake of shock value on screen.

But there is one jump scare that works even better. As a detective roams around the Bates house, tension beautifully builds with the use of Bernard Herrman’s score. Time is well spent before Mrs Bates suddenly immerges from the darkness and slices the detective at the top of the stairs to the sound of those same iconic violins. It’s a moment that has been imitated over the years but never equaled.

The most memorable scare in Steven Spielberg's shark movie Jaws is when Ben Gardner's bloated corpse pops out from the hole in his sunken boat. As with Psycho, the use of music is spot-on, with John Williams’ score and that scream sound proving to be the key ingredients of this genuinely upsetting scare.

While Exorcist II: The Heretic should be banished to celluloid hell for even thinking it could be a sequel to the peerless masterpiece that is the original film, The Exorcist III does hold up.

One of the most infamously terrifying sequences - and arguably the greatest jump scare in cinema history - takes place in one long shot in the hallway of a hospital.

Nothing seems to be happening in the eerily quiet ward, but something feels off. The slow ramping up of tension gets the audiences asking themselves in which corner of the screen the threat is going to appear from. Anticipation builds as a nurse does the rounds and hears a strange sound and… Oh, just witness it for yourself.

Usually considered more a thriller with horror elements rather than a full-blown horror film (what more do people need on the disturbing front for David Fincher’s classic not to be considered horror?), Se7en is a disturbing serial murder film that features one hell of a jolty moment.

As the police enter an apartment to arrest their suspect, they quickly realise that their man was actually a victim of the murderer. And he’s been sent to hell and back. We see his decaying dead body… Except he’s not completely dead.

Never has a cough been so shocking. What’s more terrifying is that this jump scare serves the narrative and character development – it directly contributes to fleshing out the as-yet-unseen antagonist, making you realise that the person responsible for the crimes is more methodical and patient than you dared to fear.

So, are jump scares overrated?

Are those in The Midnight Club effectively used or do they anchor themselves within the cheap startling methods that diffuse any and all tension?

Or could it be that Mike Flanagan has created a slyly self-referential meta moment which comments on the frustrating ubiquity and misuse of the jump scare in storytelling?

You be the judge... But brace yourselves. That first episode is a wild ride.