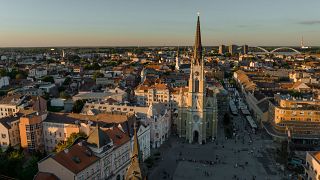 Known as the “Serbian Athens” thanks to its rich cultural heritage, Novi Sad is one of the first cities outside of the European Union to be named the European Capital of Culture.

Perched on the River Danube, in the northern province of Vojvodina, Novi Sad is home to ancient fortresses, laidback cafés and an eclectic street art scene.

Despite being landlocked, it also has beaches, with the Štrand’s soft sand stretching along the river shore.

Multiple nations have helped shape Novi Sad into the multicultural city that it is today.

These distinct cultural influences helped Novi Sad win the title of European Youth Capital back in 2019, rewarding it for its buzzing, youthful energy.

It’s no wonder that Exit festival, one of Europe’s most popular music events is held in the city’s rambling fortress every summer.

While the local ‘drunk clock’, on which the big hand tells the hours and the small hand the minutes, reminds you to take your time and enjoy life.

With the title of European Capital of Culture will also come new cultural spaces and events.

“The important thing is what remains as a legacy,” says Milenković.

“New spaces for culture, new programmes that remain after 2022 and new bridges of cooperation that have been rebuilt with the European and world art scene.”

So whether you’re planning a weekend city break or a longer tour, here are our favourite places to visit in this lively, exuberant city.

Built between 1692 and 1780, this fortress sits on the right bank of the Danube, across the water from the main heart of the city.

“The best way to get to it is to walk across the Rainbow Bridge, through the Suburbium, the historic baroque neighbourhood located in the lower part of the Petrovaradin Fortress,” saysKaleidoscope of Culture

A rambling site, the fortress contains over 16km of underground tunnels, which you can explore on a guided tour.

Built to protect the city from the Ottoman Empire, since the year 2000, the defences have taken on a new purpose - hosting one of Europe’s biggest music festivals.

Held in the Petrovaradin Fortress in July, EXIT Festival was founded in 2000 and has since become a firm favourite for international music lovers.

With over 40 stages and festival zones, it has won the Best Major European Festival award twice, in 2013 and 2017, with acts as diverse as M.I.A, Kraftwerk and Slayer performing here.

Kaleidoscope of Culture, an art gathering which takes place every September until early October is another festival to explore, according to Milenković.

“During five weeks, it focuses on five different types of art: visual, performing, applied art, literature and architecture,” he says.

The German word for beach, the Štrand, is Novi Sad’s best riverside strip. Opened in 1911, the long sandy beach is a great place to relax with friends and enjoy a drink or two.

In the summer months, you can take a dip in the river to cool down - but watch out for the strong currents.

To explore the Danube further, hop on board one of the local river cruisers.

Check out the colourful murals and street art

Novi Sad has a serious street art scene. So, if you’re visiting the city make sure to spend some time hunting down some of these unique works.*

Featuring tributes to the heroes of the COVID-19 pandemic and famous scientists, you’ll also find more playful works, including a painted basketball court close to the Štrand beach and the skate park.

Most of the murals can be found on the ends of houses and buildings. So, make sure to look around you every time you turn a corner.

Stop for a coffee in the Trčika

If you’re looking for a cool spot to grab a drink, you could do a lot worse than Trčika.

Once Novi Sad’s first ever tram, it’s now got a new lease of life as a cute and cosy café, complete with fairy lights and some original fixtures and fittings.

Although the temperature can drop here in the winter months, in the summer you can expect live music, DJs, and tables spilling out of the carriage and onto the streets.

Chill out in Danube Park

Located in Stari Grad in the centre of the city, the park covers nearly four hectares and is home to a diverse collection of plants and wildlife.

It’s the ideal location for an afternoon stroll or a relaxing picnic. The park also celebrates Serbia’s poet, with statues of Đura Jakšić and Miroslav Antić among others.

Get up early and grab a bargain

Novi Sad has a bustling market life, with everything from fruit and vegetables to fish and antiques available across its 10 regular markets.

If you’re looking for fresh seafood, head to Riblja market. Located in Podbara, the oldest part of Novi Sad, it has a long history and the market has been held in the city since the 18th century.

For fresh fruit and veg, make sure to explore Futoška and Limanska markets too.

Lovers of retro clothes, antiques and all things vintage can grab a bargain at the Nylon market, open from Friday to Sunday. Toys, records and furniture can also be found here, as well as food to sustain you while you shop.