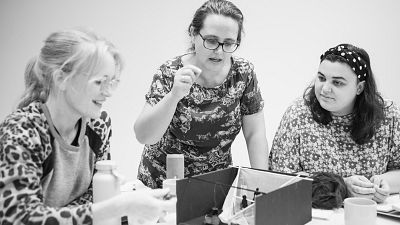 Just to the edge of the stage is a chalkboard with a seemingly endless tally. Stretching from floor to ceiling of the dark room, each dash represents another day since the start of the war in Ukraine.

When 'Cassandra', a new adaptation of Lesia Ukrainka’s 1908 retelling of the Trojan War, hits the stage in London, it will have been 222 days since Russia’s invasion on 24 February. By the time the run finishes, the count will be at 234.

Showing at the Omnibus Theatre in London, Nina Murray’s new translation of the classic Ukrainian text couldn’t be more relevant.

Although not a well-known name internationally, Lesia Ukrainka is one of the greatest writers in the Ukrainian language. In her lifetime, she endeavoured to bring multiple classic texts into the Ukrainian canon by creating her own version.

“She is our Shakespeare, in many ways,” says Nina Murray, the translator of this latest version. Shakespeare was among the classic writers she adapted.

Ukrainka’s play 'Cassandra' takes the Greek myth of the Trojan War and centres all the action on the women at the heart of the story. It’s a bloody tale of war, occupation, and the belief in truth.

Murray first discovered the text at school in Lviv, Ukraine. She started writing her translation in 2021 for a competition at The Ukrainian Institute London, a cultural centre in London.

As the Trojan War rages between Troy and Greece, Cassandra’s true prophecies are routinely ignored. If you don’t know the story, it leads to some pretty devastating results.

“It speaks to the general challenges in our culture today of not listening to women or being taken seriously, and Ukrainka makes that point in a play that’s 115 years old,” Murray says.

“One theme is the question of what is the truth? How do facts become irrelevant? And also how narratives become what define us,” she continues.

“But also, I think there's a greater point about having the courage to face something that seems unimaginable and untenable,” Murray says.

She considers how the Russian people, faced with endless lies and deception over the state of their leadership and the success of their war, will have an even longer struggle with the conceptualisation of their country’s failure if it does come.

Bringing the Trojan Wars to life

While Murray’s translation was written in 2021, the Russian invasion of Ukraine put production of the play into hyperdrive. The Ukrainian Institute London worked with Helen Eastman, a theatre director with a speciality in classics, to develop the production that debuts today, 4 October.

Eastman has previously advised on Kae Tempest’s retelling of Greek legends ‘Paradise’ at the National Theatre, and is a founder of the Live Canon ensemble, which helped bring 'Cassandra' to the stage.

The play’s focus on truth and the belief in it fascinated Eastman, as well as the resonating themes of occupation to today’s Ukraine.

“There was this idea in Ukrainka’s mind for a play about an often occupied territory and often conquered territory, and how that might map between Ukraine and Troy,” Eastman says.

When Ukrainka wrote 'Cassandra', Ukraine had spent centuries feeling the influence of a Russian Empire determined for control.

“Ukrainka is absolutely aware of using the Trojan prism through which to talk about the physical and cultural polarisation of those themes. That's already in the play. It just happens that that is a lived reality at this moment,” Eastman says.

For Eastman, it was of primary importance to find the right way to tell a story written by a Ukrainian writer a century ago in the midst of a war raging on the other side of Europe.

While one evening’s performance is dedicated specifically for an audience of displaced Ukranians, much of the audience is expected to be Brits.

“What rights and responsibilities do we, those sitting on the sidelines, have when we are not there?” Eastman asks.

Eastman made the decision not to set the version of the play in a modern Kyiv. The relationship between the text and the present are resonant enough that she didn’t want to tread on the emotional experience of those who have lived through the war.

Instead, the production explores the themes through methods like an ever tightening choreography, as characters orbit the stage in circles of ever reducing diameter.

"The illusion is designed to hem us into the last bastion of a feminine palace, while everything outside is falling apart,” Eastman says. “I think that highlights the idea of people trying to hold on to their domestic places, while everything around is destroyed.”

The 25 plus character original text has also been distilled into a play with six actors, many taking multiple parts, to create the effect of a Greek chorus.

"Because the ensemble is playing all these parts it’s interesting in terms of how we find a community,” Eastman explains. “It’s the stories that we tell ourselves that define who we are.”

A national identity in a text

One of the biggest decisions for Eastman was what to do with the play’s ending.

For a while, Eastman questioned cutting the scene as it seemed too difficult to stage. Before she did, she contacted The Ukrainian Institute London to discuss the epilogue’s importance.

“I wanted to know if I was doing the equivalent of directing Hamlet and cutting ‘To be or not to be’ from it,” Eastman says.

Dr Sasha Dovzhyk, an expert in Ukrainka’s work explained how the scene is crucial to the work’s themes. As Cassandra’s prophecies are finally able to be believed, she chooses not to use her powers as her country has already fallen.

“She wanted to use that skill for the good of Troy (or Ukraine) although nobody believed her. But once outside of that context, she has no desire to use it for any other nation,” Eastman says. It’s the play’s strongest point in favour of Cassandra’s national identity.

To Eastman, that summarises the importance of bringing the play to a British audience. The fight for Ukraine’s national identity is more than just for literal territory. It is also a fight in the face of a Russian government that denies the existence of the country’s identity entirely.

For Murray, who grew up in Ukraine studying languages before moving to Cambridgeshire as a poet and translator, the play is a way for her to do something for her fellow Ukrainians.

“This translation has become my contribution to the war effort,” she says. “Ukrainka really is a wonderful writer, and I hope that this is the beginning for some people of an interest in the culture and the literature of Ukraine.”

Cassandra plays at the Omnibus Theatre in London from October 4 to October 16.