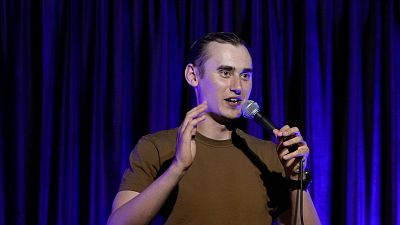 For Ukrainian comedian Serhiy Lipko, there isn’t the time for the wedding ceremony he’d have wanted before he is sent off to war.

Serhiy Lipko and Anastasia Zukhvala wanted to get married before Lipko entered the battlefields of war torn Ukraine.

While the Russian invasion rages on, the pair wed among a few dozen friends and family before heading down to a stand-up comedy club in Kyiv.

Lipko, an aspiring comedian, wanted to get in one last gig before he left to fight. With Zukhvala watching in the wings, he took to the stage in his olive-green soldier fatigues.

All topics were on the table, from hard-hitting army humour to gags on married life. At one point he joked that the military training from NATO instructors had meant he’d been finally able to improve his English skills.

Although the war is no laughing matter, Ukrainians are learning to laugh in the face of its awfulness. While it may be a coping strategy to stay sane or not, Ukrainians are still enjoying comedy as the war stretches over 100 days.

Although jokes often focus on Russian President Vladimir Putin and his army, laughing about the horrors faced by the Ukrainian soldiers as they face a tremendous battle against the odds is a red line.

“Tragedies cannot and will never be the object of humour,” said Zukhvala, also a comic, after Lipko’s show.

“This is an absolutely crazy time, beyond ordinary experience,” she said. “Our life now is made of paradoxes, and it can even be funny.”

Comedy is in the country’s DNA as the highest profile comedian is Ukraine’s President Volodymyr Zelenskyy. He was elected in 2019 after playing a lovable teacher who becomes the president in the TV comedy series “Servant of the People”.

Lipko briefly met Zelenskyy in 2016 on the set of TV game show “Make a Comedian Laugh”, where Lipko competed in camouflage fatigues as he was in the midst of his military service. Zelenskyy was a juror and Lipko had him chuckling as they spoke in Russian. Both stick to Ukrainian in public now.

While Zelenskyy is rarely seen laughing these days, comedy is often a necessary tonic to dark times.

“Laughing and stuff, that’s how you cope,” Yuliia Shytko, a crowd member at Lipko’s gig said

“We all laughed a lot,” said stand-up comedian Anton Tymoshenko, who performed later that night.

Lipko was given a day off from the army to get married in front of their comedian friendship group. Returning to the army, his nickname is “the comedian”.

Now Lipko worries for his parents. They live in a village in the south that he fears is too close to the Russian advance. But they laugh off his concerns. His mother quipped that should Russian missiles churn up her potato plot, that would spare her the spade work.

“My mother never joked before the war,” he said. “They use my weapons against me ... and that's unfair.”

For now, Zukhvala and Lipko will have to wait until the war is over for the grand celebrations their wedding deserves.

“I am a comedian who temporarily became a serviceman,” Lipko said. “I have plans and creative projects for after the war.”

“There are things to live for,” Lipko said.

What kind of person is willing to risk their death in sport?