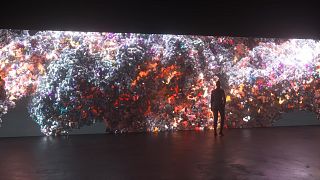 Humans have always memorialised people and events through physical objects.

Whether it’s a marriage through a wedding ring, a friendship via a photograph, or the memory of a loved one on a gravestone, we have always found ways to materialise our feelings into something tactile.

Harry Yeff wants to do the same for our voices.

The artist, alongside his partner Trung Bao, have been working on a project to turn the voices of those we love into digital and physical objects.

The project, VOICE GEMS, takes recordings of people’s voices and represents the unique wavelengths in digital sculpture form. The resulting digital gemstones are incredible to behold. Immediately, their intricate beauty is apparent, but the depth of story behind them is what sticks in the mind.

“Normally a voice or a vocal expression is like smoke - it comes and goes,” Yeff says.

“The idea that a voice can actually be represented as something that is static represents my philosophy and belief that every single vocal expression is something remarkable,” he says.

In the process of focusing on language and the content of expression, Yeff believes we miss the wood for the trees. Instead, he wants us to focus on the myriad details bound to a person’s voice: their tone, breath and candour.

“The music of your expression is a huge part of you,” he says. “A huge part of our identity and our relationships and also our deepest, most profound senses of self can be found in the information of our voices.”

It’s why he believes the physical representation of these soundbites work so well as a new method of human ceremony. When society wants to remember something, it has always tried to represent the central themes of humanity onto objects, so why not the embodiment of a voice?

For the project, Yeff and Bao have had thousands of people apply to have their voices converted into gems. So far, they’ve created 120 pieces.

The process of converting the soundbites is more than just data entry though. It’s an emotional journey for the artists, who are more concerned with the stories these voices bring to them.

The first voice they took was from a man who wanted to propose to his partner using the sound of their laughter together, instead of the typical engagement ring.

Another was a father who wanted to commemorate a brief conversation in which he reminisced with his daughter on his realisation of her growing older.

“That was actually a sad thing. It's just a very innocent conversation where a father is talking about the day that they've had, and they have a discussion if they have any time. And there's been such an emotional reaction to that piece because those moments come and go,” Yeff reflects.

The VOICE GEMS have been displayed at multiple prestigious art shows, from Art Basel to a recent show at W1 Curates in London. Some of the collected voices include Ai Weiwei, Dr. Jane Goodall , Will.i.am, and Sir Geoff Hurst, who scored the winning hat trick in the 1966 FIFA World Cup.

“He wanted to preserve the memory of that day, because many of his team members have died from Alzheimer's. And he was interested in preserving that memory to create a new form of legacy,” Yeff explains for the Hurst piece.

The digital versions of the gems have also been created on the blockchain as NFTs in order to preserve them in Yeff and Bao’s ‘1000 Year Voice Gem Archive’.

The choice to use blockchain technology comes from the way each voice gem brings a unique fingerprint. For each soundbite, the duo’s programme creates a set of colours from a 200,000 particle system.

“That information is kind of like the soul of your voice,” Yeff says.

From the digital artwork, physical versions can be created, such as the ones on display in recent gallery shows.

Capturing the fingerprint of the voice as a starting point is Yeff’s artistic goal. With Bao, the pair have created a new form of artefact, one that stores the essential and once-ephemeral quality of a person; their voice.

“I think that it’s a new form of storytelling,” Yeff says. “That moment you said ‘I love you’ to a person for the first time, or someone who has passed. Those moments live on phones and wallets and laptops.”

“Ceremony doesn’t have to be associated with a specific religion or culture. It’s an act of respect and something that makes the individual feel like they have a sense of space and togetherness with this thing they care about," he concludes.

"The visual representation allows you to experience all of that in a new way.”