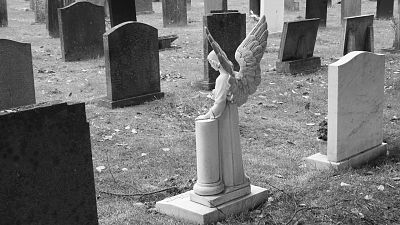 I had a strange experience on Twitter the other day. While casually scrolling, I came across a collection of tweets describing users’ despair at hearing of a friend’s death.

Because of the subtweeting way Twitter is used - where people write about another incident without directly linking to it - it took me a bit of digging to find out who these accounts were actively grieving for.

It turned out to be another Twitter user I followed. I hadn’t interacted with them directly, but I had seen and enjoyed their humorous political hot takes.

I couldn’t work out how to feel. I knew I was upset, but I also couldn’t articulate why I was sad for this person I’d barely even interacted with online.

I'm not the only one. Tons of other accounts who’d not met the person outside of Twitter were openly distraught to hear the news of their passing.

This got me wondering: as we form more and more online bonds, how do they differ from our in-person relationships? And how does that affect us when those people die?

"Our minds are capable of making our bodies feel the same reaction for a virtual stimulus as it might the real thing," Jacobson explains. A good example is sexual arousal from fantasies.

“The same thing is the case for online relationships,” Jacobson continues. “Often there's an element of interpretation and perception, which sometimes is enhanced by our mind, and can give it more meaning and even more substance than a physical relationship.”

In other words, people are able to project a lot of their own previous experiences onto the virtual existences of people they interact with online. In therapy terms, this is called ‘transference’.

Some of the relationships people form online can be even deeper than those formed in the ‘real world’.

The perception that you can’t create a meaningful relationship with someone you just know over social media isn’t accurate, argues Litsa Williams, programme director and co-founder of What’s Your Grief.

“When you go more deeply into online spaces where people do a lot of sharing, sometimes they share a lot more than they would do with the people who they know in real life, because sometimes it’s safer, or they feel safer about the distance of online relationships,” Williams says.

If someone isn’t connected to your real-world circumstances, it can allow you to form a bond without fearing repercussions from your in-person relationships. This is especially so for queer people in regressively legislated locations who form online relationships where they can be more honest about their identities than they could offline.

If an online friend like that dies, it’s normal to feel grief as you would for an offline friend.

A lot of the work Williams does with people who are grieving online relationships is to help them work through their complex feelings around perceptions of a proper way to grieve.

Disenfranchised grief can apply to people fearing the response from their grieving for a pet, or maybe an ex-lover, a secret extra-marital affair, or an online friend.

“A lot of times for these losses, we start to question if we’re allowed to grieve,” Williams says.

To help someone through the process of grieving an online friend, it’s important to learn to feel comfortable with the grief you feel.

For many online relationships, the offline public grieving forums won’t be available to access. A family is unlikely to invite a person with a huge number of online followers to a private funeral. And to be invited to someone’s in-person funeral may not be as emotionally cathartic for the online friends as they’d hope.

“The funeral that the family is creating may make a lot of people end up disappointed by the fact that it reflects something different than what your relationship with the person was.”

One of the ways Williams suggests is through mourning rituals carried out in the online space.

When World of Warcraft player and streamer Byron ‘Reckful’ Bernstein died in 2020, friends and followers assembled for a virtual send-off within the game.

Similarly, when social media accounts are memorialised, people can find solace through posting more openly about their grieving process for the person.

There are an estimated 30 million Facebook accounts for people who are now dead, according to Good Trust.

Recently, the player Hjasfarr died of cancer at the age of 27.

The #WorldofWarcraft community has decided to pay tribute to him. A funeral march has been organised on the European servers.

Part of the complexity of online grieving is that it happens on a public forum. While this can suit people more comfortable with expressing themselves publically, others who prefer to grieve in a more private form may find this upsetting.

Facebook now requires proof of a person’s death certificate before someone can memorialise a profile. But this also means that if one person has control of the memorial page, other family members and friends may not be in favour of how that individual has approached the memorialising.

Crucial to the grieving process for an online friend is that the person’s grief is validated when they do seek help from a professional.

“The grief cycle is roughly the same, regardless of if it’s virtual or physical. We go through the same grief reaction,” says Jacobson.

Just like how the loss of an online investment can trigger a similar sense of loss to squandering physical money, people will feel a real sense of loss for an online acquaintance.

“You can be following someone on Twitter and develop an affinity towards them and a one-way kind of relationship. And when they pass away, you can still feel a loss as if it was your neighbour who you no longer see stepping outside to collect the post or walking their dog,” Jacobson adds.

She notes that one difference with an online relationship is that it’s much more likely to feel like isolated grief, as there might not be anyone you can easily share your feelings with.

To handle these complex emotions, Jacobson recommends finding the space to be compassionate for yourself and your grieving process.

“It could be anything from journaling to going in the woods to make a small ceremony or some sort of commemoration, like throwing dirt in the lake or burying dirt in the ground. Something tangible and physical to do with the outside world,” she suggests.

“It could be going to speak about it with someone as well.”

Despite the existence of online relationships, bringing that grief into the physical world can be valuable, Jacobson argues.

“Ultimately, we are a physical body and we live in a physical space, and our evolutionary roots are from natural settings,” she says.

“The more we spend time with trees and grass and sunlight, the more we're in tune with our original environment, and often that can bring people a sense of groundedness.”

'Grief must be witnessed': A time of national mourning for UK COVID-19 victims is overdue ǀ View

Grieving and goodbyes difficult as lockdown compounds pain in Spain