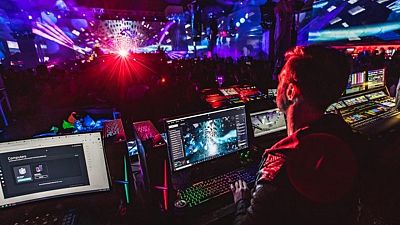 A technician alters the Volta software to create an XR piece that responds directly to the concert taking place   -   Copyright  Volta XR
By Jonny Walfisz  •  Updated: 22/06/2022

Oehlen worked with specialists like John MacInnes and VIVE Arts to create his VR piece, a medium which  might seem open only to the most established artists.

But at Volta XR, an extended-reality (XR) platform—XR is an umbrella term that includes virtual and augmented reality—the goal is to create a toolset that anyone can use.

VR art for the people

“If a paintbrush cost half a million dollars, you wouldn’t really optimise for creativity, you’d optimise for a return on investment,” says Alex Kane, CEO at Volta XR.

Instead of purpose-made XR experiences, Volta XR has a creative platform that allows users to draw and manipulate elements to create their own XR experience.

Sort of like the Microsoft Paint for XR, a user can put in a camera feed, placing themselves within a digital environment that responds in real-time to sound and movement.

It’s the perfect tool for creating a uniquely-generated music video. Unsurprisingly, many of the creators started in music. Multiple artists and events, including Deadmau5, Glastonbury, and Imogen Heap, have already used Volta to create XR music videos and concerts

“If you look at the trajectory of live music, people’s expectations have shifted away from just musical virtuosity towards spectacle,” Kane says.

“In 20 to 30 years, the direction I think it goes in is that there will be a cross between a music show and an art installation. Something you have to physically enter and is wrapped around you. It’s interactive, dynamic and constantly unique,” adds Kane.

The importance of a version of XR that is democratised so that it can be used by the largest number of people possible is Kane’s goal, believing it will open up the medium to greater creativity.

“We’re starting to see things with real artistic merit,” he says. “I think that we need more people to have the tools in their hands because that’s when someone can do a weird little technique and something new can arrive out of that.”

“The only way that people start making things with artistic merit is getting more people to have the time to get weird with it. If you’re worried about dropping a million dollars on a production studio budget, you’re going to play it safe,” he says.

Some of Kane’s favourite experiences since launching Volta have been the times an artist has surprised him and his team, finding a weird way to use it they’d never thought of.

As VR becomes more ubiquitous through fine art and publicly available production tools, it will increasingly change the way we, as a species, live with the technology.

Mark Zuckerberg's Meta is busy creating tech for interacting with entire virtual worlds. And they’re not the only ones, Microsoft, Nvidia, Unity, Roblox and Snap are all working on similar products for the future.

Games like Second Life and World of Warcraft are how many people imagine virtual reality and metaverses in the future. But John MacInnes, who produced Oehlen’s Basement Drawing, suggests virtual space is going to become part of our lives in a more integrated way, that we may not even notice at first.

“When you’re talking on your iPhone on a train to a friend in a different country, that’s a virtual space,” he says. “It radically disrupts our sense of space in a way that’s completely new, but we take it for granted. But mobile phones have only been commonly in use for the last 25 years.”

“In the same way, augmented and virtual devices will change our reality. 150 years ago, most people lived their whole life within 10 miles of where they were born,” he adds.

How VR art will shape our future, MacInnes can’t say. But what he is sure of is that it will seamlessly become part of our lives in a way we couldn’t imagine living without it.

“The next step of any technology is for it to become invisible. We use text messages now and we take it for granted,” he says.

“I enjoy being an innovator within this space and I enjoy watching the spectacle of how these technologies evolve and propagate into the wider culture and how they’re adopted and become invisible.”

“When a technology is important, we don’t think about it anymore,” he says.