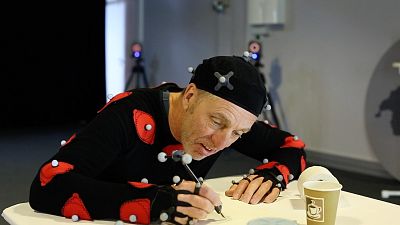 Last week I went to visit the artist Albert Oehlen in his studio in Pasadena, California.

Oehlen, who’s in his late 60s, worked tirelessly away at a new drawing in the cramped and dilapidated basement. The entire work took him only a few minutes to complete which he did to a soundtrack of electronic music he’d created himself.

But Oehlen is a recluse and was in his native Switzerland when I saw him make his artwork. I wasn’t in California either. I was in the UK, viewing his latest virtual reality artwork ahead of its release at Art Basel this week.

Welcome to the wild new world of VR art.

Oehlen’s latest work, “Basement Drawing”, is in many ways one of his most personal and least personal at the same time.

Across three minutes, the viewer is placed in the midst of a basement studio that is reminiscent of a scene from a horror video game. A photorealistic avatar of Oehlen then sits at his desk and creates his latest artwork in front of you.

Although all the details of Oehlen’s avatar, his movements and the room have been painstakingly recreated to be as lifelike as possible, the effect of realism is shattered by the purposeful glitches programmed into the piece.

Oehlen lurches and jitters along to the beat of the oppressive electric soundscape. The lights cycle through jarring shades and at one point, an arm reaches out from one of the paintings hanging on the wall.

All the while, you can get up close and personal with the man himself, watching his movements that have been motion captured to imitate his real physical form. It’s an uncanny experience.

Oehlen is an introverted artist and shies away from the limelight. Creating this piece was his way of creating intimacy with his audience, without having to meet them.

The project is the brainchild of Oehlen and Hans Ulrich Obrist of the Serpentine Gallery.

“Albert has always been interested in using different kinds of technology in his practice,” says Samantha King, head of programme at VIVE Arts who helped to create the work.

“It’s just a continual evolving process of expanding the artist’s toolkit,” she continues

“VR is enabling artists to experiment and explore how it can help expand their practice.”

Finding a truer reality in VR

John MacInnes, a storyteller and VR producer who has worked on everything from the Call of Duty video games, to creating real time works for the US Department of Defence, was also on board with the project.

“Albert knew what he wanted,” MacInnes says. “He was very interested in representing himself in the act of painting.”

MacInnes worked with his studio to motion capture Oehlen, then asked him where he wanted to be set, imagining anywhere from the bottom of the ocean to the surface of the moon. Oehlen chose the dank basement in Pasadena.

“It was this really cramped, messy, claustrophobic, dark basement space. I thought that's really cool as it subverts your expectation as to what the artist should be doing and where they should be doing it,” MacInnes says.

The grimy reality of the place helps to sell the effect, MacInnes explains, with more fantastical setting stopping viewers from connecting as easily.

“I think what was interesting was Albert’s interest in deconstructing the artificiality of it,” MacInnes says.

“In VR, the sense of reality is literally only one pixel deep. You have this very real sense of presence in reality, and yet that is so fleeting and tiny. You could step into Albert’s body if you wanted to,” he says. “That’s always fascinated me as a practitioner.”

Whereas some VR attempts to completely immerse the viewer, the goal of the artwork was to bring attention to the artificiality of the medium.

To experience a work of art without questioning the reality and cracks of the world is behaving too well, MacInnes suggests. “As consumers of art, there’s a very prescribed way in which we interact with art. It’s the velvet rope in front of the Mona Lisa,” he says.

“Well, last week someone threw a piece of cake on it. For a moment that broke the illusion,” he adds, referencing the recent incident.

Basement Drawing gives people a means to break their illusions of reality. On first viewing, people might simply watch Oehlen draw from afar. By their second, they’re willing to break the walls of the piece down.

Basement Drawing is part of a new wave of VR artworks that are being presented at prestigious events like Art Basel.

For a long time, the medium felt gimmicky with many of the works created more tech demos and mini games than outright artworks.

With artists like Oehlen, Dominique Gonzalez-Foerster and Wu Tsang embracing the medium, is the art world yet to catch up to the importance of VR?

“The definition of what the work is, is the response the viewers that go into it have. There’s something that is particular to VR more than standing in front of any work of art, is that you experience the work of art and are embodied in it,” explains MacInnes.

With VR, there’s a unique experience of intimacy that’s impossible with many traditional forms. When MacInnes previously created a photorealistic model of David Bowie, he noted the uncomfortable experience of feeling so close and in the personal space of the late rockstar.

“There’s always that guy that invades your personal space and it’s just amazing what we, as human beings, have evolved to think is behaving properly,” MacInnes says.

“VR brings that to the forefront because you are thrown into a space with all your humanness. Then you’re confronted with your humanness and the limits of what you’re comfortable with in terms of spatial intimacy,” he says.

Oehlen found the experience of seeing himself in the work of art unnerving. Most people don’t get to feel like they’re standing in a room with a lifelike version of themselves at work.

“He said, ‘I look kinda awkward’, and I’m like, ‘because you look kind of awkward’,” MacInnes jokes.

“As human beings, we have an ego that smoothes out all the rough edges of who we are.

“There’s something very interesting about seeing yourself as a physical likeness,

“Our brains haven’t evolved quick enough to make that an acceptable kind of experience.”