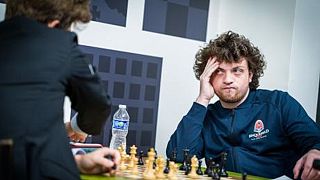 We here at Euronews Culture are still trying to figure out quite how cheating-by-sex-toy works, but we’re trying out several vibrating configurations and will get back to you.

But back to Carlsen.

Last week, he quit an online game in the Julius Baer Generation Cup after playing only one move, leaving announcers shocked and escalating the controversy.

He has stated on Twitter on 26 September that he thinks Niemann is a cheater, over board and online. Furthermore, he now refuses to ever compete against him ever again.

“I believe that Niemann has cheated more - and more recently - than he has publicly admitted,” Carlsen wrote. “His over-the-board progress has been unusual, and throughout our game in the Sinquefield Cup I had the impression that he wasn’t tense or even fully concentrating on the game in critical positions, while outplaying me as black in a way I think only a handful of players can do.”

The full statement in text:

At the 2022 Sinquefield Cup, I made the unprecedented professional decision to withdraw from the tournament after my round three game against Hans Niemann. A week later during the Champions Chess Tour, I resigned against Hans Niemann after playing only one move.

I believe that cheating in chess is a big deal and an existential threat to the game. I also believe that chess organizers and all those who care about the sanctity of the game we love should seriously consider increasing security measures and methods of cheat detection for over the board chess. When Niemann was invited last minute to the 2022 Sinquefield Cup, I strongly considered withdrawing prior to the event. I ultimately chose to play.

I believe that Niemann has cheated more — and more recently — than he has publicly admitted. His over the board progress has been unusual, and throughout our game in the Sinquefield Cup I had the impression that he wasn’t tense or even fully concentrating on the game in critical positions, while outplaying me as black in a way I think only a handful of players can do. This game contributed to changing my perspective.

We must do something about cheating, and for my part going forward, I don’t want to play against people that have cheated repeatedly in the past, because I don’t know what they are capable of doing in the future.

There is more that I would like to say. Unfortunately, at this time I am limited in what I can say without explicit permission from Niemann to speak openly. So far I have only been able to speak with my actions, and those actions have stated clearly that I am not willing to play chess with Niemann. I hope that the truth on this matter comes out, whatever it may be.

Carlsen has yet to provide any actual evidence for the claims and he seems Carlsen to suggest that he is restricted for legal reasons. We’ll keep you updated on further developments.

Read the background to this ongoing case in our original article published on 16 September:

If you thought that chess was boring, the Netflix show The Queen’s Gambit soon sorted that out.

However, some recent cheating accusations have just made the discipline a hell of a lot kinkier.

You read that right.

The 4 September win at the Sinquefield Cup in Saint Louis represented something of a meteoric rise for Niemann and was unexpected, as Magnus had not been beaten in 53 sittings. Niemann was the lowest ranking of the 10 players in Saint Louis, and had become the first chess player to beat Carlsen in more than two years.

Carlsen decided to withdraw from the event following his loss.

“I’ve withdrawn from the tournament. I’ve always enjoyed playing in the Saint Louis Chess Club, and hope to be back in the future,” he tweeted.

The five-time World Chess champion also added a video of football coach Jose Mourinho’s 2020 news conference speech held after a game in which his team may have lost due to questionable officiating: “I prefer not to speak. If I speak I am in big trouble… and I don’t want to be in big trouble.”

No further explanation was provided, but many interpreted Carlsen’s post as insinuating that Niemann cheated during the game.

To further spice things up, the same day Carlsen withdrew (5 September), the World Chess Hall of Fame suspiciously decided to beef up its anti-cheating security measures. This included scanning Niemann before his next match.

Though no concrete evidence has yet been brought forward to back accusations of cheating, a recent interview in which Niemann acknowledged that he had violated the rules in the past by using computer assistance in online games made the rounds.

In response, Chess.com stated that it had “privately removed” Niemann’s account from its website and the Global Championship in Toronto decided to uninvite Niemann.

Except he didn’t limit it to that, saying that it was “a known fact” that Niemann had previously cheated on Chess.com, referring to the aforementioned interview.

As for grandmaster Eric Hansen, he added that he had removed Niemann from chess events he had hosted due to cheating suspicions.

When does the sex toy come into play?

The issue was already proving to be one of the biggest chess scandals in years, especially because it concerns Niemann, who is notorious in the chess community for his difficult behaviour.

Then, somewhat predictably when it comes to rumour mongering and drama stirring, Tesla CEO Elon Musk waded in.

Musk shared a video on Twitter of an influencer discussing the rumour that Niemann used a vibrating sex toy during the competition in order to cheat.

Eventually, Niemann addressed the cheating allegations, admitting he had cheated during virtual Chess.com tournaments when he was younger. However, Niemann said, he never cheated IRL.

“I have never cheated in an over-the-board game. If they want me to strip fully naked, I will do it,” Niemann offered. “I don’t care. Because I know I am clean. You want me to play in a closed box with zero electronic transmission, I don’t care.”

Still, social media couldn’t get enough of it:

So, a statistical anomaly? A targeted attack spread because Niemann’s abrasive personality is not to the community’s liking? Simply another case of social media being the bin juice of humanity? Or has Niemann elevated the dark art of cheating to a new elaborate level after watching Lock Stock And Two Smoking Barrels one too many times?

Whatever the case may be, if the Chess Federation want to strip players bare for the games just to avoid any cheating allegations, their viewing figures may well spike.

Let’s just hope that the second season of The Queen’s Gambit don’t take any ideas from this cheating saga – although Netflix are now greenlighting NC-17 rated content, no one needs to see squirming players climaxing before a checkmate.