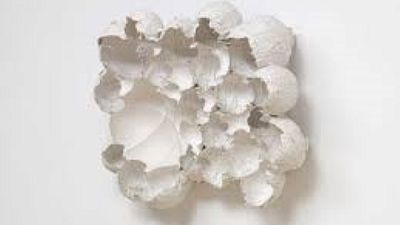 This week our round-up of some of Europe's best art shows begins in the UK capital with a large white artwork made from plaster and string.

It is fair to say the sculpture is not widely recognised and nor is its creator. But London's Tate Modern museum wants to change that.

It's staging the first ever major UK exhibition of Maria Bartuszova's work. There are 80 of her plaster works as well as bronze and aluminium sculptures. Many have never been shown in the UK before.

"We're really pleased to be opening the exhibition of the work of Maria Bartuszova. She was a Prague-born artist who spent most of her career in the Slovak city of Kosice," she said.

"It's a 30 year career survey spanning work from the early sixties to the late eighties and really explores her continual experimentation to find a new sculptural language."

Stolen during the colonial era, dozens of Benin Bronzes that once decorated the royal palace of the Kingdom of Benin are going on show for one last time in Germany before being repatriated to Nigeria.

The renowned pieces of African art and their tumultuous journey up to the exhibition at Berlin's Humboldt Museum speak to Germany's gradual reckoning with the colonial era and the injustices of the past.

The move to return some of the bronzes is the latest in a series of steps taken by Berlin to admit responsibility for the crimes of the colonial era, including the official recognition in May 2021 of a genocide perpetrated by Germany in Namibia.

Among the items being exhibited are a pair of thrones and a commemorative bust of the monarch of the Kingdom of Benin, in modern-day Nigeria.

His works have scandalised as much as they have revolutionised art.  Austrian painter Oskar Kokoschka was a "punk" before his time and a champion of freedom. Now he has a major exhibition in Paris.

"With the ambition to make people discover the whole of the work" of the man who was also a poet, writer and playwright, and "the incredible richness of his career which spanned the 20th century", exhibition curator Fanny Schulmann told AFP.

Rendez-vous culture: The Best of Culture in Europe

Rendez-Vous Culture: Must see events to end summer on a high