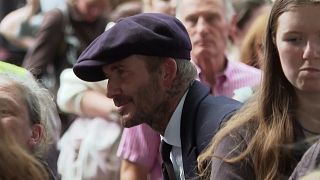 Former professional footballer David Beckham was among thousands of people queuing in London on Friday to pay their respects to the late Queen Elizabeth II.

The queue to see the Queen lying in state stretched for nearly four miles beyond Tower Bridge.

Other mourners were able to pass the time by taking photos with the British celebrity.

Beckham said he had turned up to queue in the early hours, hoping to avoid the main rush, but was thwarted in his plan.

"I thought if I came at 2am it would be a bit quieter."

Beckham was among a number of sports stars from Britain and around the world who paid tribute to Queen Elizabeth after her death at the age of 96 last week.