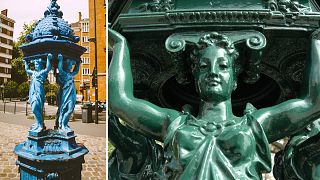 In 1872, British philanthropist Sir Richard Wallace set off on a mission to provide safe drinking water for all in  Paris.

He succeeded in establishing a network of drinking fountains across the French capital and everyday millions of people pass by them without knowing how they came into being. So, as France and many other countries are celebrating their national heritage this week, Euronews Culture has been delving into the past to help explain the present.

In the late 19th century, following the siege and bombings during the Franco-Prussian War and the collapse of the Paris commune, clean drinking water in Paris was scarce. Many communities relied on water that was transported from the Seine, which was often unsafe to drink.

Barbara Lambesis, President of the Society of the Wallace Fountains says many Parisians turned to beer and wine, a more sanitary - and often cheaper - alternative to water, which drove a large portion of the city into alcoholism.

“There were health consequences… lots of alcoholism, which of course tears away the social fabric of community,” Lambesis explained. “Richard Wallace decided he was going to make clean drinking water free and available and easy to access for everyone, regardless of whether they're a visitor or a resident and regardless of their social status.”

In 1876, after inheriting a large fortune, Wallace donated 50 fountains to the city of Paris to be installed throughout the capital. Beyond functionality, Wallace put a lot of consideration into the aesthetic and practical elements of the fountains, sketching out the first designs himself before handing them off to Charles-Auguste Lebourg—a sculpture from Nantes—to deliver the final product.

“They were made of cast iron because they were durable and easier to replicate; and they were almost three metres tall so that they could be easily seen and recognized,” Lambesis explained. “They're full of symbolism; the four [figures featured in the fountains] represent human virtues that Richard Wallace wanted people to adopt when they drank from them. Those virtues are simplicity, sobriety, charity, and kindness.”

The fountains are still functioning across Paris, and even beyond. It is estimated more than 150 are scattered around the world, from Brazil to Beijing.

Sir Richard Wallace, the man behind the curtain

Little is known for certain about the early life of Richard Wallace, who was born in 1818, although it’s believed that he was the illegitimate son of Richard Seymour-Conway, the 4th Marquess of Hertford, an English aristocrat and art collector. When he passed away in 1870, most of his wealth was unexpectedly left to Wallace.

In 1871, Queen Victoria knighted Wallace for his “splendid munificence during the difficult period of the siege of Paris,” and he was later made a baron.

He died in 1890 in Paris at his home—the Château Bagatelle—and was later buried in the Père Lachaise cemetery. But his legacy lives on.

The Society of the Wallace Fountains

A few years ago, Barbara Lambesis - an American who lives in Paris for three months out of the year - was on a stroll through the city when one of the fountains caught her eye.

“I became very intrigued with it, and that was the beginning of a long journey; I researched it a great deal, studied it a great deal and decided that I was going to put a purpose to my wandering,” she said.

That was the beginning of the Society of the Wallace Fountains, which she later founded alongside Gretel Furner in 2018. According to Lambesis, the society has a mission that can be broadly divided into three parts.

The first is to promote, preserve and protect the fountains throughout Paris.

“The second part of the mission is to recognize and encourage philanthropy in the spirit of Richard Wallace,” she explained. “Richard Wallace was an Englishman who was born in London, lived most of his life in Paris and loved Paris… and suddenly inherited a great deal of money during the terrible seige in Paris in 1870. He immediately took that money and went out and distributed it to the poor, to the people who were suffering the most.”

The third part of the mission, Lambesis explained, is to “position the Wallace Fountains as the global symbol of international universal equal access to clean drinking water for everyone on the planet, because that’s really what those fountains stand for.”

To commemorate their 150-year anniversary, the Society of the Wallace Fountains has launched a celebration to promote, preserve and protect the fountains through a series of events.

As a part of this, Lionel and Ariane Sauvage – French philanthropists working particularly with the Louvre Museum in Paris—will be receiving the new Wallace Fountain award to celebrate their 30+ years of philanthropy.

On Thursday September 22nd, the British Ambassador to France will be awarding Lionel and Ariane Sauvage with the new Wallace Fountain award to celebrate their 30+ years of philanthropy, and recognize the strength philanthropy as a whole.

In addition, the Society has organized numerous events around the capital throughout the month, most of which are open to the public. Here’s the rundown of when and where to catch them.