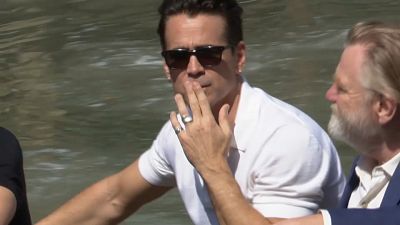 Actors Colin Farrell and Brendan Gleeson are looking to repeat their successful partnership in their new film "The Banshees of Inisherin" which has premiered at the Venice Film Festival.

The film follows the lives of best friends Pádraic (Colin Farrell) and Colm (Brendan Gleeson), who live on a remote island off the west coast of Ireland. The pair fall out when Colm unexpectedly puts an end to their friendship, without warning or explanation.

The pair were last brought together by director Martin McDonagh for In Bruges and he again is at the helm of this finely balanced drama that's peppered with comedy.

But it was superstar Harry Styles who has arguably caused the most hysteria in the second week of the festival.

Thousands of fans were on hand for the red carpet arrival of the once boy-band singer-turned-actor.

He is on top of the bill with Florence Plugh from Olivia Wilde's new film, "Don't Worry Darling", screened out of competition.

Alice (Pugh) and Jack (Styles) are living in the idealised community of Victory, an experimental company town housing the men who work for the top-secret Victory Project and their families.

But Alice can’t help questioning exactly what they’re doing in Victory, and what’s really going on in this fabricated paradise.

The Venice film festival ends on Saturday with the awarding of the Golden Lions.

Timothée Chalamet wins Venice. Go home, everyone - it’s all over.