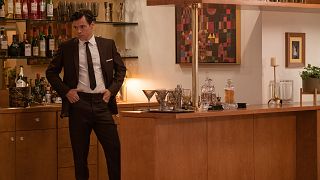 He wore a backless red top and stole all the headlines at the Venice International Film Festival – until the other most famous man in the world arrived in town.

This year’s event has been all about the boys - Timothée Chalamet, who wore a halter neck backless jumpsuit by Haider Ackermann for the premiere of his new film ‘Bones and All’, and then Harry Styles, less daring but no less fashionable in a navy Gucci suit. Styles attended the festival on Monday as part of his role in ‘Don’t Worry Darling’, the most-talked about film of the year - none of it because of the actual movie, a 1950s Stepford Wives-meets-The Truman Show- thriller set in the Californian desert.

‘Bones and All’ and ‘Don’t Worry Darling’ have premiered, generating huge crowds, mainly young women, who camped out on the red carpet to await their icons. In the drooping heat, the fans sheltered under a rainbow of umbrellas they’d put up for shade. Some bystanders were comparing the frenzy to Beatlemania – but it’s been seen in the past here for Brad Pitt and Johnny Depp.

The buzz of a Chalamet or a Styles appearance is priceless to any movie event trying to recover from the pandemic and get audiences back into the cinemas. However, perhaps this high-profile appearance at Venice was the last thing the cast of ‘Don’t Worry Darling’ needed – especially as its lead actress Florence Pugh did not make an appearance at the film’s press conference, officially because her plane from the set of ‘Dune’ wasn’t landing until afterwards. She was on the red carpet, but those who’ve followed the huge Twitter chatter around the film will have spotted an awkward-looking group shot, with Harry Styles, Florence Pugh and director Olivia Wilde separated by the rest of the cast.

Since filming ended on ‘Don’t Worry Darling’, there have been reports of frosty relations between Pugh and others, a break-up between Harry Styles and its director Olivia Wilde, plus actor Shia LaBeouf disputing Wilde’s claim that he was replaced as the male lead role in the film, insisting that he quit.

Unsurprisingly, the press conference also felt tense. Journalists were ignored when a question was asked about Shia LaBeouf, and if Styles and Wilde would work together in future, although Wilde did directly answer a question about relations with Pugh, praising her acting ability and saying of rumours, “the internet feeds itself, I don’t feel the need to contribute.”

The film itself has been overshadowed by this rumour mill, but it does feature a brilliant performance from Pugh and the production design is exceptionally stylish. There’s also a car chase with Pugh at the wheel that’s a welcome overturn of gender stereotypes in action films. But despite its launch in pre-Oscar season at Venice, Pugh would be its main hope of recognition – while he’s decent in his role, Harry Styles is still a better musician than he is an actor.

Again unsurprisingly, ‘Don’t Worry Darling’ has had next to no press access at Venice, and that’s true of other big films showing here. This festival, unlike Cannes, accepts Netflix films and they’ve dominated the line-up. ‘Blonde’ the story of Marilyn Monroe, played by Ana de Armas and directed by Andrew Dominik, has yet to premiere here, but is one of the streamer’s great hopes for awards season. ‘Bardo’ an excellent three-hour surrealist comedy in Spanish by ‘The Revenant’s Alejandro González Iñárritu, could already be a favourite for Best International Film after some rave reviews.

However, some journalists grumble they have little access to interview the big names at this festival this year – a change to the past, where an Oscar campaign would start here in September.

And another change is that in 2022, unlike previous years at Venice, it’s not immediately obvious who the front runners are in this year’s Oscar race. It was the place that launched films including ‘Joker’, ‘Gravity’, ‘Birdman’ ‘The Shape of Water’ and ‘Black Swan.’ Performances in two of the films appearing at the festival have received high praise, Brendan Fraser as an obese recluse in Darren Aronofsky’s ‘The Whale’ and Cate Blanchett as an unravelling classical conductor in Todd Field’s Tár, but there is no outright stand-out film (yet) from Hollywood’s offerings to the Lido.

Nevertheless, actress Julianne Moore and the rest of the international jury have some exceptional films to consider for the Golden Lion this year. ‘L’Immensita’, a film by Emanuele Crialese and starring Penélope Cruz, is the story of a girl who wishes to become a boy in 1970s Italy. It could win Cruz her second acting prize at Venice in a row -unless Blanchett beats her to it.

Luca Guadagnino’s ‘Bones and All’, starring Chalamet, is a love story about two young people who need to eat human flesh and seems to be both a crowd-pleaser and a critical hit, a rare thing. It also might be Chalamet’s best performance since his last film with Guadagnino, which unleashed him on the world – ‘Call Me By Your Name.’

The lack of a clear favourite means the top prize could just go to a film that’s simply universally liked– and that might be Santiago Mitre’s ‘Argentina 1985’, the story of how an inexperienced legal team dared to prosecute that country’s bloody military junta. It’s a fascinating story told with huge charisma from lead actor Ricardo Darin, and there’s not a critic who seems to dislike it. How much publicity one of cinema’s greatest trophies will generate in this celebrity-obsessed year is another matter.