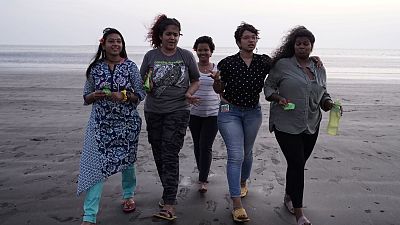 This hip-hop group sprung to life in 2020 when five young ladies met for the first time in Mumbai. Wild Wild Women consists of rappers, singers, poets and artists. Through fearless lyrics and catchy beats, the band aims to change how women are perceived in their country.

"We just came for an event, and after that, we made a group, and that's when Wild Wild Women began," says Preeti Sutar or Hashtagpreeti as she prefers to be called.

Despite having no formal musical qualifications, the women all share a mutual love for music. "I used to listen to Nicki Minaj a lot and I was like, I've never seen any female rappers in Mumbai yet. So, I was like, maybe I can try," says Jackie Lucas, aka J Queen.

Each group member writes their own lyrics and believes that this is the key to their success. Their songs tackle subjects such as feminism, capitalism, culture and inequality. Through their music, they aim to create change and give hope to women suffering from oppression.

The Wild Wild Women believe that being an all-female group magnifies their message and allows them to reach a broad audience. "I think there is power in individuality, but when we are together, it's a blast. It's more and more power," explains Ashwini Hiremath or Krantinaari as she is known.

"We all are equal to one another, and we treat each other like sisters. We never say, 'You're elder to me, or you're younger to me.' Whatever it is, it's an equal decision. Work together, grow together," says Jackie.

There is space for everyone

Hip-hop music has been present in India since the early 1990s and its popularity has grown significantly in recent years. India's rap scene is predominantly dominated by men, with women traditionally finding it challenging to break into the industry.

"There are so many women who are making music. You will find beautiful singers and beautiful rap artists everywhere. There is activity happening with women and music on every corner, but it is all behind closed doors," explains Ashwini.

The girls state that rapping has helped them overcome cultural challenges and gives them an outlet for their emotions. "Rapping gives me confidence. Rapping gives me a feeling of liberty and empowerment. It's my way of survival," says Preeti.

The group aims to inspire young women to speak their minds and be true to themselves. "When young girls listen to us, they are so happy to see us perform because they have never seen something like that," explains Preeti. "Every girl wants to speak out her emotions and not care about what people will think," she adds.

Performing in the underground hip-hop scene helped the Wild Wild Women gain a following. The group's recent music videos have captured viewers' attention and been admired by their peers.

"I feel like I've upgraded myself through being part of Wild Wild Woman and I am getting respect from people because of the music we have created. We are creating change," says Jackie.

The group are in the process of building a social media platform and is confident about the future. "Wild Wild Women are to focus on creating good quality music. I see a lot of potential for our group. I see the love we get as a collective and how unique we are," states Preeti.