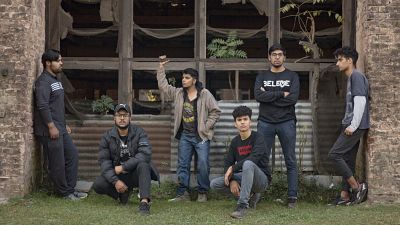 Sufiyan Rouf was 16 years old when Kashmir went into a 132-day shutdown. The death of the militant leader, Burhan Wani, by government forces in July 2016, sparked days of deadly violence. The unrest caused the deaths of 76 civilians, the closure of schools and universities and the imposition of a strict curfew.

Confined to his home, Sufiyan found himself with a lot of free time. One day while surfing the internet, he stumbled upon a video that would change his life. "I just came across a YouTube video. It was NaPoM versus Alexinho (Beatbox Battle World Championship quarter-final). I saw that video and it hit me really hard. I've been beatboxing ever since," he told Scenes.

Sufiyan was hooked. For days on end, he practiced and researched the vocal percussion. "The best thing that I love about beatboxing is that you don't really need an instrument to beatbox, all you need is your mouth and you can beatbox almost anywhere," the now 21-year-old explains.

The music scene in Kashmir

The music history in Kashmir is very rich. Over the centuries, the country has been influenced by Indian and Middle Eastern classical music. However, in recent years, American hip hop has become more popular. MC Kash became the first rapper from the conflict-stricken area to gain international fame. His sharp and politically conscious words gave the Kashmir people a voice.

Other rappers, such as Ahmer Javed and SOS, followed suit. Despite the emerging rap scene, beatboxing was still relatively unknown. Realising there was a gap to fill, Sufiyan began posting content on his social media and quickly gained a following. He gave a shout out to all the beatboxers of Srinagar to join him and in July 2018, the Kashmir Beatbox Community was born.

“I thought, why not in Kashmir? We didn't have a community in Kashmir and only if it was three people, four people, I wanted to start with something,” Sufiyan says.

Bringing hope to a community

The Kashmir Beatbox Community now has over 30 members. It has grown into a family environment where beatboxers learn new sounds, new patterns and participate in friendly battles. “We are best friends as well as rivals at the same time,” beatboxer Mumin Khan says.

It has been hard to develop an international profile. Internet outages for months on end affected the group's ability to promote itself. "Back in 2019, I started gaining good popularity on Instagram, but after that, there was an internet shutdown of like one year. So I lost a lot of clout on Instagram," revealed Sufiyan.

By hosting events, tournaments and concerts, the collective aims to raise awareness of the art of beatboxing. “I look at beatboxing as an empty canvas on which you can portray your creativity, your skills. There are different sounds in beatboxing and you can incorporate these sounds and make music out of it,” Kashmir Beatbox Community member Hayat Shafi explains.

The group has been a pillar of support to the young men. "Growing up in Kashmir has definitely not been an easy thing because of shop closures, curfews and internet shutdowns. Not only music, education, medicine, but all fields have also been compromised because of the conflict that we're living in," Hayat says. "I can't do this alone. No one can do this alone. So I really need the support of every member," Sufiyan adds.

Rapper's Delight - the birth of female MCs in Indian Kashmir