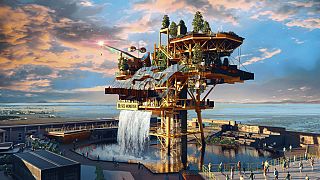 The offshore rig is set to become an oasis in the North Somerset’s coast in England.   -   Copyright  Newsubstance
By Giulia Carbonaro  •  Updated: 25/08/2022

After spending 30 years in the North Sea, a decommissioned oil rig is set to be transformed into one of the UK’s largest art installations, proving that rusting, out-of-date industrial infrastructure can be turned into a thing of beauty.

The 35-metre high, 450-tonne heavy platform, which has spent one year in a Dutch shipyard being stripped, cleaned and repaired before its final journey to the Weston-super-Mare’s beach in south-eastern England, arrived in the UK on the morning of July 13.

Its arrival was welcomed by crowds, with people gathering at Weston-super-Mare’s beach from dawn to see how the colossal feat of industrial engineering was dramatically lifted onto the ground by a giant crane - a process which took three hours.

Since then, the oil rig renamed “See Monster” has been in a process of complete transformation, growing from a bare, grey skeleton and painted yellow into a triumph of life.

With a 6,000-piece art installation, a 12-metre waterfall, grass, plants and trees planted on top, the oil rig, once completed, is expected to look like an oasis off the coast of North Somerset.

Not bad for a once-symbol of exploiting nature for human profit.

The platform is not yet completed, but once inaugurated it will see visitors exploring it from the beach, the seafront and on board.

The art installation will also be a celebration of “the great British weather” (which is hardly ever celebrated by those living or visiting the UK), according to Newsubstance - the company behind the art project’s idea.

That same stormy, unforgiving weather which the See Monster had to endure for three decades while deployed in the North Sea will power the art installation with wind turbines and solar panels.

The case for leaving offshore rigs where they are

The transformation of the decommissioned oil rig into a massive art platform is also meant to spark a debate over what we should be doing with retired industrial infrastructure, the so-called ‘eco-monsters’ which are fairly ubiquitous around the world.

While the question is legitimate, and several countries have recently moved to turn abandoned industrial sites into thriving art centres (check out what Luxembourg did in Esch-Sur-Alzette), there’s increasing evidence that decommissioned offshore rigs would better be left where they stand, in the middle of the sea.

The reason, according to experts, is that over time this giant infrastructure becomes the perfect habitat for local wildlife, including at-risk coral reefs. Removing it would constitute significant damage to the habitat that has come to form around the offshore rigs, and it’s also an incredibly expensive feat for oil companies.

But the man-made structures are often seen by the public as monsters destroying the natural look of the coast, and, as per UK’s marine law, oil companies have to remove decommissioned oil rigs. In the country, around 7,000 to 100,000 tonnes of offshore architecture are removed every year.

A short-lived and expensive metamorphosis

The transformation of the See Monster is, in this light, the best thing that could have happened to the decommissioned steel giant. But the metamorphosis of the oil rig into an art platform won’t last long: the platform is set to be deconstructed and recycled in October, as the artworks exhibited on it will be reinstalled around the town.

The site is expected to have completed its transformation by the end of summer, and will be visitable as part of one “Unboxed: Creativity in the UK”, previously infamously known as the “Festival of Brexit”.

The festival, running from March until October, cost £120 million (€141.8 million) in total - a considerable amount for a nation which is now struggling with soaring prices and where inflation is expected to hit a record 18.6 per cent in January, the highest peak in almost half a century.