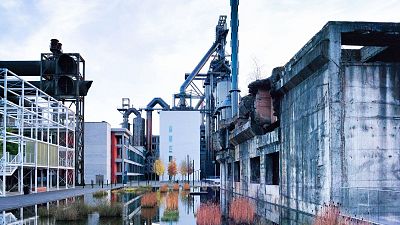 With its capacity for urban regeneration and breathing new life into a city’s cultural sphere, the European Capital of Culture is an award with genuine image-changing potential.

Esch-sur-Alzette was once at the heart of Luxembourg’s booming steel industry in the iron-ore rich south. Named Europe's Capital of Culture for 2022, the town has now welcomed €54m of investment to become a beacon of culture in a small country better known for finance than art.

Sharing the Capital of Culture 2022 title with Kaunas in Lithuania and Novi Sad in Serbia, Esch 2022 is putting together a programme next year of over 2000 events that will include 310 performances, 137 exhibitions, 141 concerts and 360 participatory workshops.

Luxembourg’s multicultural demographics and unique linguistic mix mean that events will be taking place across Esch in German, French, English and Luxembourgish, as well as a small number in Spanish and Portuguese.

But how did it go from industrial heartland to cultural capital?

While the driverless electric shuttle buses silently rolling back and forth up Esch’s rue de l'Alzette demonstrate its forward-thinking attitude, the hulking blast furnaces rising from the town’s nearby Belval neighbourhood are a stark and constant reminder of what this region was built on.

Covering around 3,700 hectares, the iron ore found in the southern regions of Luxembourg belongs to one of the biggest ore depots in Europe. By the turn of the 20th century, Luxembourg was the sixth largest cast iron producer in the world and the eighth largest producer of steel.

From the open-cast mines and transport railways of the Minett region to the smoking factories of Belval, Esch-sur-Alzette was a thriving centre of industry in the heart of Europe that exported its products across the globe.

Yet by the 1970s, this crucial industry in Luxembourg had begun an irreversible decline. The last mine at Fond-de-Gras in the Minett had already closed in 1964, and 10 years later in 1974, the world steel market collapsed due to over-production. With the closure of Belval’s last blast furnace in July 1997, the former steel production site became a wasteland.

But by as early as 2001, the blueprint for the cultural rejuvenation of the area had already been laid down with the Fonds Belval state funding project.

Just over 10 years later, the bid for the European Capital of Culture would begin.

Cross-border collaboration and beyond

Established cultural behemoths like Paris and Berlin were among the winners during the award’s early years following its inception in 1985, but since the turn of the century the Capital of Culture has been awarded to far less-heralded destinations.

But what makes Esch-sur-Alzette’s bid unique is that it’s a cross-border collaboration with 8 municipalities in rural northeastern France’s Communauté de Communes Pays Haut Val l’Alzette (CCPHVA). With a faded industrial past similar to its Luxembourgish counterparts, this forgotten region of France will benefit greatly from the award.

“The common industrial history of this part of Luxembourg and France is a strong link between the areas as the immigration over the decades has made this region a cultural melting pot,” explains Nancy Braun, Director of Esch 2022.

“The different influences allow the border region to offer a unique cultural experience. Our vision for Esch 2022 is closely linked to the overarching European idea. We want to encourage the “Minett” region to be more united, by making the whole mining area more aware of its unique European identity and the extent of its own possibilities.”

But while the French region is relatively unknown, the team behind the bid are painfully aware of Luxembourg’s unflattering image as an international financial centre and a tax haven for the rich, which makes showcasing Esch’s cultural evolution ever more important.

Perhaps no other venue in Esch epitomises that drive than Kulturfabrik, a former slaughterhouse that was turned into an artistic squat in the 1980s before becoming a non-profit cultural centre at the turn of the millennium. With over 250 events held each year, the venue is a weekly cocktail of concerts, plays, exhibitions, public readings and street art.

However, Kulturfabrik is just one of many venues hoping to leave a lasting cultural mark in 2022.

With over 2000 events and exhibitions to choose from, it might be difficult to know where to begin so here’s a few to consider.

Urban Art Esch is a street art project featuring local and international artists and there are around 50 works to explore around the town, with walking and cycling tours starting from Kulturfabrik.

Telling the human story of Luxembourg’s Nazi occupation during WWII, the National Museum of Resistance and Human Rights has been a cornerstone of cultural life in Esch and, when the museum reopens in February 2022 following renovations, it will present a brand new exhibition.

Based on the juxtaposition of two artists from different eras, Who Seeks Peace will focus on the work of the artists Frans Masreel (1889-1972) and Hamid Sulaiman and will explore oppression, resistance, the consequences of dictatorship and war, flight and human rights.

Posing fundamental questions about how identity is constructed and lost, Ego-Tunnel is the first solo exhibition from German artist Gregor Schneider and is hosted by Konschthal Esch.

Over in Belval, the two remaining blast furnaces (there were six originally) are now surrounded by the modern creative architecture of La Cité des Sciences and the industrial remains are accessible to the public and are used for regular cultural events, including the Blast Furnace Festival.

And across the border in France, cultural centre L’Arche in Micheville will open in 2022 and will be a hub for live performance and digital art.

The future of Esch

Hoping to ensure a visible and long-lasting legacy, €28m worth of infrastructural investment in building and renovation has been made available for Esch and the surrounding region in view of 2022 and beyond. With the ongoing development of Belval and the new nature trails in Minett offering a sustainable future, Esch will have a solid foundation to build on with culture at its heart.

“The concept of culture does not refer exclusively to art, nor does it necessarily take on conventional, sometimes elitist forms that many people associate with the term,” says Françoise Poos, Cultural Programme Director.

“Culture is what we live and breathe every day, what we do, what defines us and our identity.”

Steven Spielberg turns 75: A look back at a Hollywood visionary