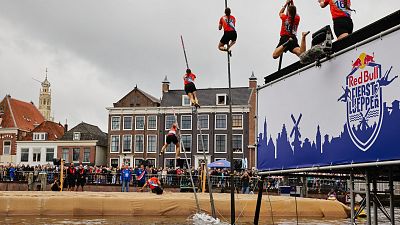 In the spectacular competition, which made its return after a 10-year break, sees brave athletes and amateurs attempt to jump as far possible over a body of water with the help from a special vaulting pole.

They achieve this by sprinting towards a pole standing vertically in the water, jumping on it, and climbing as high as possible to the top of the pole. Then, while hanging on, they use the momentum to push themselves forward and land as far as possible in an effort to win.

The ancient sport is known as 'fierljeppen' (which literally translates to "furthest jumper") and dates back to 18th century, when farmers would use wooden poles to cross waterways and canals.

Over time, it turned into a competition with the first official match in 1771.

However, the sport was not properly structured until two centuries later in 1957, when the Friesland league was created.

Who were crowned the canal vaulting champions this year?

This year's Fierste Ljepper took place at Haarlem's scenic Molen De Adriaan windmill, despite the challenging weather conditions due to wind and rain.

In the men's event, 29-year-old Rian Baas from Gouda was crowned the winner thanks to a jump of 17.09m that edged out former winner Jaco De Groot by just seven centimetres.

"The vibe was very good. There was a lot of crowd and I spoke to some people and they really liked the sport. And I'm happy that we could show how the sport looks and how extreme it is," said Baas, shortly after securing his first-place position.

19-year-old Demi Groothedde from Jaarsveld won in the women's category with 15.27m.

She said: "This is so cool. Given the circumstances I am very happy with my result."

Check out the video above to witness this gravity-defying sport