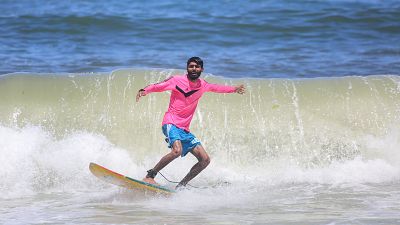 Muhammad Abu Ghanem was just seven years old when he fell in love with surfing. Learning the sport through his father, he made his first board out of an old, abandoned refrigerator door. Years later, the 24-year-old is now one of Gaza's finest surfers.

"I crashed a lot of boards in order to reach where I am today. I kept trying and struggling, and after a long time, I managed to become very good at it," Muhammad tells Scenes. "To learn to control a surfboard, you start with a small one and with practise, step-by-step, you will go from knowing nothing to reaching total mastery."

Barriers to riding the waves

Getting surf equipment into the Palestinian territory can be challenging. Border controls have restricted the movement of essential goods, fuel and other items in and out of the Gaza Strip since 2007.

"The occupation prevents anything related to this sport. Surfboards, straps and wax are all prohibited from entering Gaza," Muhammad explains. "The wetsuits that protect us from the cold are also prohibited. When they see us surfing, people are surprised because it is so uncommon in Gaza."

Although Gaza's shores may not be as well known as the Hawaiian seas or Bondi Beach in Sydney, there is a burgeoning surf scene. "When we shared an event on Facebook, we found many people were interested in surfing, including girls. They wanted to learn this sport, but unfortunately, we don't have the means to teach them all," says Muhammad.

Since there are no surf clubs, wave lovers must learn the water sport in other ways. "I first had to teach myself how to surf with barely any hardware, initially only a small fishing boat where I practised my stance," says Mahmoud Yousef Sultan, a lifeguard and fisherman. "What I can do in Gaza is learn from the Internet. I watched surfing videos on TikTok and Twitter to learn from them. They taught me how to surf and how to make surfboards, so now I can make them too," adds Muhammad.

Having faced decades of conflict, the socio-economic situation in Gaza was difficult even before the COVID-19 pandemic. According to the World Bank, poverty rates spiked by almost 30 per cent in 2020 in the Palestinian-occupied territories. To forget their everyday struggles, many Gazans hit the beaches for a sense of relief.

"When the electricity in Gaza is cut off for many hours, we often go out to the sea for breakfast and lunch with our families," says Sabah Rajab Abu Ghanem, one of the few female surfers on the strip. "We stay at the sea because it is where we can experience a taste of freedom and happiness," she adds.

Muhammad and Mahmoud teach boys and girls how to surf in the summer months. They are keen to pass on their knowledge and skills and also guide the youngsters to find solace in the Mediterranean waves. "The fun is in surfing itself. You feel like you're flying through life, and that is a truly beautiful feeling," Mahmoud concludes.