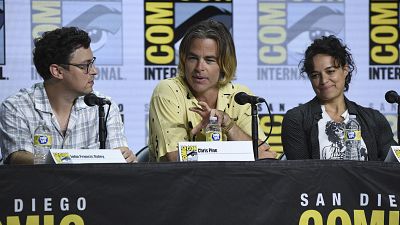 John Francis Daley, from left, Chris Pine and Michelle Rodriguez attend a panel for "Dungeons and Dragons: Honor Among Thieves" on day one of Comic-Con   -   Copyright  Richard Shotwell/AP
By Theo Farrant  with AP  •  Updated: 22/07/2022

A first look at an upcoming Paramount film adaptation of the fantasy role-playing game Dungeons and Dragons was unveiled at Comic-Con in San Diego.

Before we take a closer look at the forthcoming movie, it's important we know what the world's most popular role-play game Dungeons and Dragons is.

What is Dungeons and Dragons?

Dungeons & Dragons (commonly referred to as D&D) is a fantasy tabletop role-playing game which was released in 1974.

The game allows players to create their own unique characters (such as elf warlocks, dwarf paladin and wizards) and embark upon imaginary adventures within a fantasy setting, designed by a Dungeon Master (DM).

A Dungeon Master serves as the game's storyteller, and narrates the details of the story that are not controlled by the players.

Together, players solve tasks, engage in combat, explore, and gather treasure and knowledge.

In the process, each player earns experience points (XP) along the way in order to level up and become more powerful.

The game is typically played over a series of long sessions.

Dungeons and Dragons, which was popular in the late 1970s and 1980s, has seen a modern day resurgence, partly due to having featured in various pop culture, including Netflix's Stranger Things and The Big Bang Theory.

What's the film all about?

The film tells the story of a thief and his band of unlikely adventurers, who undertake an epic heist to retrieve a lost ancient relic.

But similar to the real life fantasy game, things get dangerous along the way.

Directed by the writers of 'Spider-Man: Homecoming' (John Francis Daley and Jonathan Goldstein), the movie aims to bring the beloved world and playful spirit of the legendary board game to the big screen.

A trailer for the film, which was unveiled at San Diego Comic-Con, hints that it's going to play like a wisecracking spin on "Game of Thrones."

Comic-Con, the pop culture extravaganza, returned in full scale for the first time in two years.

Cast members Chris Pine, Hugh Grant and Rege-Jean Page appeared on stage at the 6,000-capacity arena to discuss the movie's take on the game.

Hugh Grant was nervous about how he'd be received at the annual pop-culture convention.

"I was a virgin, but they were very kind to me, very gentle," the British star said Thursday after a warm Hall H reception.

Regé-Jean Page also made his debut on the San Diego convention's biggest stage.

"It's the first time I stepped out on a panel in Hall H, which was something of a lifetime dream," he said. "And it was everything I could have imagined. It was electrifying. It was exciting, and there was this incredible sense of community and relief and excitement and just everyone getting the payoff of something they've looked forward to for so long. And being able to share that with the fans in the moment was the privilege of a lifetime," he said.

Chris Pine believes the audience is going to love the movie, comparing it to the likes of Monty Python and Game of Thrones.

"What I really loved about it is that it's light, it's buoyant, it's fun, it has, you know, a little Monty Python. It has 'The Princess Bride.' It's got the big epic scale of 'Game of Thrones.' It takes itself seriously, but it just has a real deep fun to it, which I think, especially nowadays, is just a good thing to put out in the universe," said the 41-year-old American actor.

"Dungeons and Dragons: Honor Among Thieves" is set to release in March 2023.