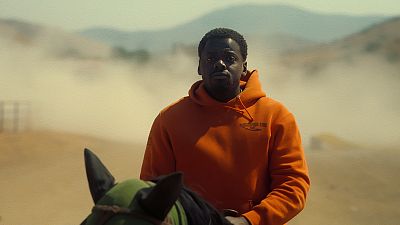 There's little in contemporary movies quite like the arrival of a new Jordan Peele film.

They tend to descend ominously and mysteriously, a little like an unknown object from above that casts an expanding, darkening shadow the closer it comes.

After Peele's singular Oscar-winning debut, 'Get Out', about the possession of Black people's bodies and mistaken beliefs of a post-racial America, and his follow-up, 'Us', a monstrous tale of doppelgangers and societal mirrors; the closely-kept-under-wraps Nope brings a new set of horrors and unsettling metaphors.

The highly anticipated film, starring Daniel Kaluuya, Keke Palmer and Steven Yeun, follows a group of residents on an isolated Californian horse ranch who encounter a mysterious force in the clouds that affects human and animal behaviour.

It's Peele's most ambitious film yet and digs into the nature of spectacle and the desire to document it - a multithreaded theme that encompasses Hollywood history and Nope itself.

The film released today (22 July) in the USA exclusively in cinemas. It comes to European cinemas in August.

As a Universal Picture film, it will make its streaming debut on Peacock later on in the year. A date has not yet been announced.

What has been the response to 'Nope' so far?

The film has received mostly high praise from critics so far - with some critics comparing Peele to filmmakers like Steven Spielberg.