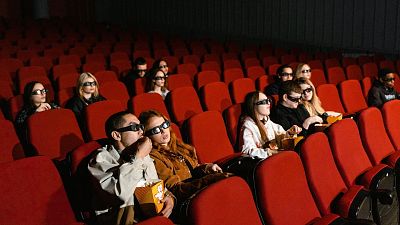 A French film festival wants to get you off your couch and into the cinema, by offering nationwide cinema tickets for just €4.

France's Fête du cinéma, or Cinema Festival, is back for its 37th edition. For four days, from July 3 to 6, cinemas across the country will offer discounted tickets.

And it’s not just cinemas, museums, libraries, metros and airports are all celebrating the festival and setting up screens.

The festival is held by the Fédération Nationale des Cinémas Français (FNCF) to get people back into the cinemas.

France at the forefront of film

France has one of the biggest film industries in Europe with cinema a regular part of people’s lives but the industry was left reeling from the effects of the COVID-19 pandemic.

So far, 2022 has shown more signs of progress. In just the first five months of the year, 62 million tickets have been sold. It’s a third less than 2019, but still an improvement.

As the pandemic's impact on daily life reduces, the new worry for the FNCF is the cost of living crisis sweeping across Europe.

The cost of living versus cinema

A survey from the National Centre of Cinema and the Moving Image (CNC) found that the drop in attendance was not just a “loss of habit” but also due to rising ticket prices, a lack of interest in the films being shown, and competition from streaming platforms.

“We are fighting against only one enemy,” says Aurélie Delage, manager of the Megarama cinema group in the French commune of Garat. “The couch, which is free!”

Cinema prices in Paris can go for over €15 if you want to see a 3D film. When you add the costs of getting to the cinema and back, the expense of a single trip is often less than a month’s subscription to a catalogue of films with services like Netflix or Disney+.

But most operators insist that the majority of cinema tickets in France are sold for less than €7 and that it remains the cheapest night out compared to the theatre, sport or music concerts.

The €4 price tag for the Cinema Festival is a way of getting people to remember how special it is to see a film for the first time in a cinema.

In the past year, US films edged out French films in popularity, with the big blockbusters like Spider-Man: No Way Home getting the most seats filled, followed by No Time to Die and Dune.

One of the country's biggest films of the moment is Top Gun: Maverick, which has had over 3.8 million admissions.

“This is the film that will make the public want to come back to the cinema again,” says Marc-Olivier Sebbag, general delegate of the FNCF.

The €4 ticket deal, while a great way to attract people to the theatres, could only ever be a temporary measure, Sebbag explains.

They are “a welcome gift, an exceptional price,” that cannot be maintained, he says.

Manager of Megarama cinemas, Delage explains that she will only make “a few dozen cents” on a ticket, and is concerned with the rise in costs, such as electricity for the projectors and air conditioning.