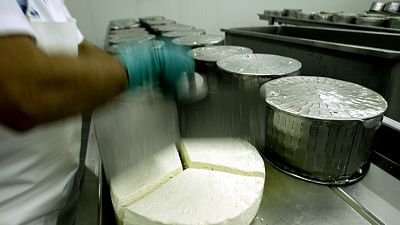 An employee works at a feta factory in Erythres, near Athens.   -   Copyright  AP Photo/Petros Giannakouris, File
By Euronews  with AFP, Reuters  •  Updated: 14/07/2022

The European Union's top court has ruled against Denmark and says the country has mislabelled white cheese as "feta".

The ruling is a victory for Greece, which has been fighting to protect its intellectual property right to use the term for dairy products.

Denmark has allowed local producers to continue exporting cheese to non-EU countries under the protected designation of "feta", the EU Court of Justice stated on Thursday.

The ruling comes after a top EU court advisor said in March that Denmark had violated its obligations under EU law.

Danish authorities should have "prevented and stopped such use on its territory", the Luxembourg court said in a statement.

Greece claims that feta -- made from sheep and goat milk -- has been part of its cultural heritage for 6,000 years. It was designated a traditional Greek product by the EU executive in 2002, giving it legal protection in the bloc.

Denmark had argued that banning its producers from exporting white cheese can restrict foreign trade.

In 2005, the EU court ruled that only producers based in Greece reserved the right to call its sheep's milk cheese "feta," rejecting a German-Danish appeal.

But Denmark has since allowed its cheese producers to continue using the name when exporting the product outside the EU.

If the country refuses to comply with the latest ruling, the European Commission can appeal for fines.

EU is cheesed off with Denmark