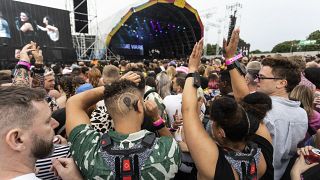 In June, Scottish DJ John McDevitt was at Mighty Hoopla, a music festival in London, watching a drummer warm up on stage.

Deaf from birth, McDevitt learnt to speak from lipreading lyrics, developing a life-long love of music in the process.

This love helped him to forge a successful career as a DJ in Scotland, where he plays in clubs and has a radio show under the name 'Def Beatz'.

Music festivals have presented something of a problem though, as he was forced to stay away from the crowd.

“The vibration is a big thing for a deaf person so going to a festival…I was apprehensive about how I was going to hear it.

“It’s also a confidence thing. You’d always find me near the speaker so I could feel the vibrations.”

But this time around he was carrying a secret weapon, or rather wearing it.

Along with a host of other deaf music fans, McDevitt was wearing a haptic suit designed to enhance his festival experience.

The suit had 24 touch points attached to the torso, wrists and ankles which correspond to different musical elements of the performance and vibrate to create a sensory experience for the wearer.

The connections between the suit and action on stage were enabled by the vodafone 5G network, and in a world-first the suit also allows the wearer to experience the reaction of the crowd.

“The guy was doing the drum sound check and I could only feel the drums in a small part of the vest, then the full band kicked in,” says McDevitt.

“It was quite surreal, it wasn’t until the first song had finished I realised the pads were for the crowd reaction.

The suit that McDevitt wore was a team effort, created by Vodafone, Music Not Impossible, and UNIT9. Their objective was to create a multisensory experience for hearing impaired people, to help them enjoy music in real time.

The suit is intricately designed with real-time recording to aid the wearer. McDevitt described being able to feel the keys on the keyboard, and the suit can even vibrate to reflect when the crowd has their hands in the air.

“It mirrors and showcases the crowd energy and crowd interactions,” says Valkova.

“We wanted to get a message across of inclusivity and everybody coming together for the enjoyment of music.”

How is technology changing sport for disabled people?

Meanwhile in the world of sport, leaps and bounds are being made in terms of disability access.

Action Audio combines live commentary with spatialised audio which helps users follow the action on the court during broadcasts.

Having already trialled Action Audio at the Australian Open, earlier this year AKQA teamed up with the BBC and Lawn Tennis Association (LTA) to provide their services to British viewers.

Filling in the gaps in sensory experience for sight impaired sports fans is what Tim Devine, Executive Innovation Director at AKQA, calls “the datafication of sport.”

“At the moment there’s an information gap,” says Devine, who points out that the sound spatialisation that AKQA uses is similar to that being developed for use in the metaverse.

What does the future hold for disabled people and live entertainment?

So far so good, but how can advancements in disability access to cultural events be expanded?

AFKA have big plans to roll out their tech further, and aim to shift it into new arenas.

“Next year we aim to launch a courtside experience,” says Devine. “I didn't think we would get to this point this time last year.”

Meanwhile the haptic suit could soon be available in clubs all over Europe.

“This is a really interesting and promising project,” says Valkova.

“It’s inspirational to think how we can roll this out and have the concept grow and grow. We’re able to translate this set up to different music genres and live performance setups.”

For his part McDevitt dreams of donning it for one of his DJ sets, and hopes it will be widely available for deaf music lovers in the future.