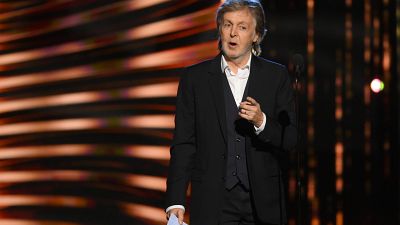 Paul McCartney turns 80: From the Beatles to vegan food McCartney has had an illustrious career   -   Copyright  David Richard/AP
By Tim Gallagher  with AP  •  Updated: 17/06/2022

Rock and Roll legend Paul McCartney is celebrating his 80th birthday on June 18, prompting a look back on an incredible life and career.

Famed as part of legendary 60s band, the Beatles, McCartney and his bandmates Ringo Star, John Lennon and George Harrison were the most popular and influential band in the world.

Their music symbolised an era of freedom and experimentation, and the foursome soon became psychedelic avatars whose outspoken views on politics, sexual freedom and drug use challenged the status quo of stuffy gone-by eras.

Their split in 1970 traumatised fans, but the music they created at their glorious peak has been discovered and cherished by each subsequent generation. McCartney and writing mate John Lennon created a song catalogue revered for its wit, sophistication and enduring beauty.

They went from fairly simple rockers like "She Loves You" to unique, layered masterpieces like "Penny Lane" and "Strawberry Fields Forever" in four short years of astonishing artistic growth.

Why did the Beatles split up?

McCartney and Lennon, the creative heart of the band, started to spend less time together as the pair found love, McCartney with American photographer Linda Eastman, and Lennon with famous artist Yoko Ono.

McCartney married Eastman in 1969 - and Lennon married Ono just days later, after divorcing his first wife, Cynthia whom he and the band had known since childhood.

The breakup of Lennon's marriage to Cynthia spurred McCartney to write ‘Hey Jude,’ for Lennon's son; it would go on to be the Beatles' most successful single.

After a series of acrimonious financial and creative disputes, in 1970 McCartney signalled the Beatles would part ways by releasing his first solo album.

McCartney found success in his post-Beatles life with sixteen albums under his belt (not including collaborations) and was still capable of selling out the world's largest arenas in his 70s.

McCartney went on to form the band Wings in 1971 - giving his wife Linda a place in the band despite her limited musical range. The band lasted for a decade before he embarked on a solo career again.

Paul and Linda launched a vegan food line together in the 90s and fought for animal rights causes. Linda died of breast cancer in 1998 after nearly 30 years of marriage.

McCartney married Heather Mills in 2002 but the marriage collapsed after four years, leading to an ugly divorce in 2008 that attracted much media attention.

Mills testified that McCartney was an abusive husband and made a number of sordid assertions that were rejected by the judge. The divorce case shed light on the scope of McCartney's personal fortune which was estimated to be €760 million and included luxury real estate and artworks by Pablo Picasso and Auguste Renoir.

Paul McCartney has received numerous Grammy Awards, an Academy Award, and has received a knighthood from the Queen of England.

McCartney had three children with Linda - Mary, now a photographer, Stella, a prominent fashion designer, and James, a musician - plus Heather, a daughter from Linda's first marriage who was adopted by McCartney, who is now a potter.