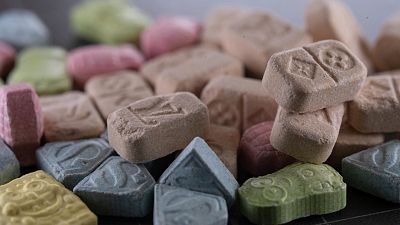 It’s not just longer passport queues being blamed on Brexit, as researchers say the UK’s EU exit, as well as Covid-19 lockdowns, has caused a dramatic drop in drug quality.

A new study has found that the quality of MDMA, also known as Ecstasy when in pill form, has severely dropped in quality in the UK since 2021.

Researchers from The Loop, a UK drug-checking charity found that almost half (45%) of substances sold as MDMA at English festivals last year didn’t contain any MDMA at all.

To compare, in 2019, just 7% of substances sold as MDMA didn't contain the drug.

Instead, much of the 'MDMA' sold in UK festivals seems to contain either cathinones, a chemical similar to other amphetamines, or just plain caffeine.

"The drug market was turned upside down by Covid, lockdowns and Brexit combined," Professor Fiona Measham, a co-author of the paper, chair of criminology at the University of Liverpool and director for The Loop told Euronews.

Are lockdowns to blame?

In 2021, the UK was one of the first European countries to reopen its nightlife after Covid-19 lockdowns. This was also seen as a likely cause of the change in quality of MDMA in the UK.

“COVID-19 lockdowns and the shutdown of UK nightlife led to a slump in demand for ‘party drugs’ and suppliers scaled back production. Then, as UK nightlife reopened ahead of other European countries, demand outpaced supply,” said Dr Michael Pasco, a Cardiff University research associate and co-lead author of the study.

Another interesting study tested the water supply of seven European cities across the Netherlands, Belgium and Italy during lockdowns and showed there wasn’t a decrease in use of some drugs like cannabis.

But there was a 50% drop in the use of MDMA. This is likely because it’s used as a party drug and naturally, there were far less parties in those cities during the pandemic.

"We reasoned that producers reduced production/supply of MDMA during the lockdowns due to decreased demand," Measham says.

"Demand for MDMA would have decreased quite substantially whilst festivals, bars and clubs were unable to operate. Then once UK nightlife reopened after ‘Freedom Day,’ demand increased and outstripped supply in part because Dutch pill factories took a while to reopen and in part because the transport network between the UK and EU had virtually ground to a halt. Supermarket shelves were short of certain products for the same reasons."

How Brexit played a part

But the researchers at The Loop think that the supply chain disruptions that have plagued post-Brexit trade are also to blame.

“This was compounded by Brexit-related supply chain disruptions affecting distribution. During this unprecedented turbulence in the drug market, substances that look like MDMA were mis-sold to unknowing customers,” Pascoe explains.

"The whole length of the supply chain was disrupted from manufacture and road haulage, through supply chains to the festivals, bars and clubs where party drugs would have been taken," adds Measham.

The reduction in Heavy Goods Vehicles (HGVs) transporting items from the EU to the UK has also meant a reduction in the amount of trucks used to smuggle drugs.

"A lot of UK ecstasy enters the country via the Netherlands," says Measham.

"Part of our reasoning for why the cathinones 3-MMC and 4-CMC were so prevalent in 2021 was because they were still technically legal in the Netherlands at the time of the data collection."

"We reasoned that the higher availability of these substances and relatively similar appearance/effects profile to MDMA meant they were readily able to fill the demand for ecstasy," she says.

The cutting of Netherlands-quality MDMA in the UK could be pinned on the supply chains, suggests Steve Rolles, senior policy analyst at Transform Drugs Policy Foundation.

"Supply chain issues for many products have impacted all of Europe, but appear to have been worse in the UK due to Brexit related bureaucracy, and problems with shipping, heavy good vehicle drivers and so on," he says.

"These supply issues and shortages of many products, appear to have been echoed in some drug markets - creating an increased incentive for adulteration and mis-selling as demand outstrips supply," Rolles continues. "The increases in adulteration does seem to have been a bigger issue in the UK suggesting Brexit may have exacerbated the problem."

Interestingly, MDMA quality hasn't dropped in a similar way across the EU.

"We did not detect those same adulterants. Our feeling is that drugs sent by air were more affected,” Mireia Ventura, manager at the Trans European Drugs Information Project told Vice.

The European Drug Report 2021 from the European Monitoring Centre for Drugs and Drug Addiction (EMCDDA) found that although there was a decrease in MDMA purity across Europe in 2020, the decrease was from 88% to 80%, much higher than the UK figures.

Figures from the 2022 EMCDDA report will be released later this June.

In The Loop's study, it’s also suggested that the changes in currency exchange values may have incentivised mis-selling of lower quality goods to the UK.