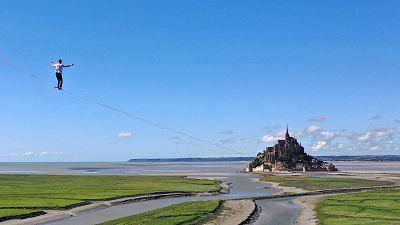 Tightrope walker Nathan Paulin claimed a new world record on Tuesday (24 May) as he completed the longest tightrope walk of all time.

The French daredevil completed a 2,200-metre long walk from a crane to the abbey of Mont Saint-Michel, a tidal island and commune in Normandy, France.

28-year-old Paulin let himself down on the wire just metres before the finish "for safety reasons" his entourage said.

"He reached the stopping mark and so the (distance) record is beaten," his spokeswoman, Laura Zhang, told reporters.

He also claimed the previous record when he completed the then longest crossing of 1,662 metres in 2017 above the Cirque de Navacelles, a steep-sided canyon in southern France.

Paulin's previous stunts include a tightrope walk from the first floor of the Eiffel Tower, over the Seine River, and a daring walk between two hills above the Red Beach (Praia Vermelha) near Rio de Janeiro's Sugarloaf Mountain.

Check out the video above to see Paulin's record-breaking achievement