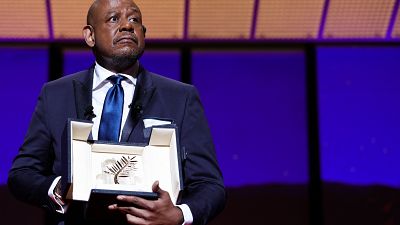 At Cannes Film Festival, US actor, producer, author and activist Forest Whitaker has received a Palme d'honneur, not just for his prolific career, but also for his commitment to projects through the Whitaker Peace & Development Initiative that he founded in 2012.

He was joined on the red carpet by the production team of the film "For the Sake of Peace".

It's a documentary that took more than six years to film and bears witness to the consequences of the civil war in South Sudan that has left 400,000 people dead since 2013.

The film was co-directed by Christophe Castagne and Thomas Sametin of the French production company R2.

"Forest's request was to put over a positive message and simply to highlight South Sudanese people who fight for peace on a daily basis, " explained Castagne to the Euronews correspondent in Cannes.

"The object of this film is to put South Sudan back into focus, to explain what's going on there," added co-director Sametin. "The good thing about this film is that we put faces to the people who live there, we explain their situation, which is quite terrible, but without talking too much about politics, without making it too complex, we really make portraits, so that people get inside and understand the life and survival of these people."

The narrative tells the tale of two villages whose residents kill each other over repeated cattle thefts.

A young woman, with the support of the Whitaker Peace & Development Initiative, gradually enables the two villages to communicate and find a way out of the conflict.

"South Sudan is a very young country, like many African countries, and if the country pulls through, and I hope it does because it is a wonderful country, it will be thanks to its youth," said Castagne, "and our two main characters in the film, Gatjang and Nadenge are young people!"

The other main protagonist in the film is a young man threatened with death because of his ethnic origin.

In a refugee camp, he finds meaning in his life and brings peace by refereeing football matches.