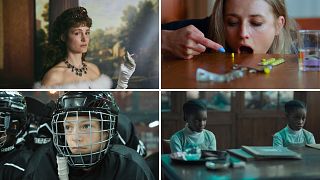 After two years of disruption, the world’s biggest film festival, Cannes, is rolling out its red carpet once again for its May 2022 edition and it’s also celebrating its 75th anniversary.

While film stars like Tom Cruise, Kristen Stewart, Tom Hanks, Lea Seydoux, Marion Cotillard and Forest Whitaker are expected to climb the Cannes steps, this is also a chance for some of Europe’s best filmmakers to start their climb to the Best International Film category at the Oscars. Both recent Oscar nominees Thomas Vinterberg’s Danish comedy-drama, Another Round, and Joachim Trier’s The Worst Person in the World, were first spotted at Cannes. Here’s what European critics are tipping as must-sees at this year’s festival:

This year’s Competition may have shuffled to a better gender equality ratio, with five films by female directors now in the running, but it’s to the festival’s sidebar competition, Un Certain Regard, where audiences will be looking to spot the Campions and Vardas of the future. Corsage, by Austrian filmmaker Marie Kreutzer, should be a don’t-miss. It stars Vicky Krieps (she of The Phantom Thread and Bergman Island) as Empress Elizabeth ‘Sisi’ of Austria, who as she marks her 40th birthday in 1877, finds her inquiring mind and restless spirit increasingly at odds with her stuffy, corseted existence. Given how like Diana, Princess of Wales, that sounds, it might be no surprise to discover that Corsage’s producers also made the recent hit, Spencer.

THE SILENT TWINS by Agnieszka Smoczynka

Up and coming Polish filmmaker Smoczynka directs this world premiere, also in Un Certain Regard, which stars Black Panther’s Letitia Wright and Small Axe actress Tamara Lawrance as real-life identical twins June and Jennifer Gibbons, who would only communicate with each other during their childhood in West Wales. It’s based on an adaptation of journalist Marjorie Wallace's book about them, The Silent Twins, and explores the strange secret world that the twins inhabited.

Lithuanian filmmaker Kvendaravicius was captured and murdered by the Russian army in Ukraine on April 2 2022 while making this film. It won’t play in any particular section of the festival, but Cannes said it was “essential” to add it to its programme. The movie consists of footage the documentary maker had filmed in Mariupol before his death, and it is edited by his fiancée Hanna Bilobrova, who was able to bring back the material. Kvendaravicius also made ‘Mariupolis’ in 2016, about life in the Ukrainian city under the shadow of the conflict with Russia. There are other films from Ukraine in the festival, but this is likely to be the most visceral and timely.

Belgian director Dhont won the Camera D’Or in 2018 (the prize for a first-time feature film at Cannes) when he was still in his twenties, for the delicate and beautiful film, Girl, about a trans girl who’s training to be a ballerina. It’s been enough to put him straight into the main Competition with his second feature film, Close, which his brother has co-produced. Close is another examination of identity – it’s the story of two 13-year-old boys who are close friends, but who grow apart after their relationship is questioned.

In Rodeo, hot-tempered and independent Julia, played by Julie Ledru, finds escape in a passion for motorcycles and the high-octane world of urban ‘Rodeos’ – banned gatherings where riders show off their bikes and their latest daring stunts. Expect lots of action scenes coordinated by Mission Impossible-Fallout’s Mathieu Lardot. It’s in the Un Certain Regard category, but Rodeo has to be one of the most anticipated titles to watch in the entire festival and could do for 33-year-old director Lola Quivoron’s profile what Titane did last year for Julia Ducornau.

This is the only high-profile Russian film at the festival after Cannes banned movies funded by the Russian state. The historical drama is made by Kirill Serebrennikov, feted for his previous films, LETO and Petrov’s Flu, which have been shown in previous years at the festival. This should feature a powerful central performance from actress Alyona Mikhailova as Antonina, the wife of the composer. Serebrennikov’s obvious talents are in high demand – he left Russia this year, and is working on a new film with Ben Whishaw about radical Soviet poet Eduard Limonov.

If you caught the series Normal People during the 2020 lockdown (or The Lost Daughter a year later) you might be a fan of Irish actor Paul Mescal. He’ll be found in another Cannes sidebar, Critics’ Week, playing a young Scottish father on holiday with his daughter 20 years ago. But the story is from Sophie’s perspective as a woman and as an 11-year-old child, as she remembers her holiday through the haze of memory. Critics are expectant for Mescal and young Sophie’s (played by Frankie Corio) performances.

SICK OF MYSELF by Kristoffer Borgli

A Norwegian- Swedish production in Un Certain Regard comes from the producers of Oscar-nominated The Worst Person in the World, which also got its buzz from a Cannes world premiere. Will they hit on another winning formula with this rom-com? Directed by Kristoffer Borgli, it’s a story based around two artists, Signe and Thomas, who are in a deeply competitive and toxic relationship. When Thomas suddenly finds success, Signe tries to regain her own status by attracting attention and sympathy.

ONE FINE MORNING by Mia Hansen-Løve

French Director Hansen-Løve enjoyed critical acclaim last year for Bergman Island, starring Tim Roth and Vicky Krieps. Léa Seydoux is now Hansen-Løve’s muse for another study in relationships which is showing in Director’s Fortnight. Seydoux will also be found in a major Competition film, David Cronbenberg’s Crimes of the Future, but fans may enjoy this performance too as Sandra, a young mother who raises her daughter alone and pays regular visits to her sick father. She begins a passionate affair with a friend, Clément, the enjoyment of which is juxtaposed against her father’s decline.

This horror by British director Garland, who wrote The Beach and made his directing debut with Ex Machina, gets a special screening at Cannes before its release in Europe this summer. It stars Jessie Buckley and Rory Kinnear, with Buckley as a young woman confronted with the horror of toxic masculinity. The film trailer has already generated a huge amount of anticipation.