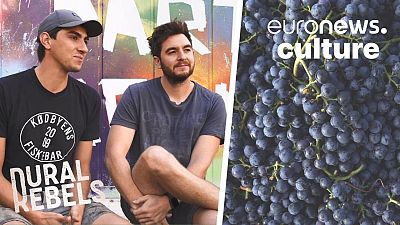 Jonas and Daniel are brothers from a family of winemakers going back five generations.

In 2014 they took over their family land in Bockenheim, in the Rhineland-Palatinate district of Germany, with an ambitious project: to transform the vineyard and make natural, organic wines.

The brothers say that the optimal climate at the edge of the German ‘Weinstraße’ (wine route) gives their wines plenty of character and allows them to be genuinely organic.

The brothers’ wine, sold under the name Brand Bros, is available in more than 25 countries.

What is natural wine?

The exact characteristics of natural wine are not strictly defined. But generally, it means wine that is made with as little intervention as possible, both in the growing and fermenting stages of production.

“With the organic farming it was quite easy,” says Jonas. “Our dad always wanted to do it but it was just him alone and like 12 hectares. It wasn't possible for him at the time. But he didn’t spray herbicides for 18 years, so we came into a good state of soil.”

However, when it came to rethinking the winemaking the stakes were a lot higher. In traditional winemaking, sulphites are added to stabilise the wine, to stop it from changing too much once it’s bottled. Natural winemakers either use no sulphites or very minimal sulphites.

“Just letting go is harder than adding stuff when you know it’s going to be ok in the end,” admits Daniel.

On their vineyard, Jonas and Daniel use plant-based products like herbal extracts or tea to strengthen the vines. Clover and wild herbs are also planted to attract bees and other useful insects.

No yeast is added to the grapes to kick off fermentation, instead, natural yeast starts the process spontaneously.

“We just make wines that we want, we just make what we like," says Jonas. "And I think that’s why is working … We represent the wines and if we love them, you share them with passion and compassion.

"People get that and they fall in love with the wine and the emotion.”

'It's not a job, it's a disease': meet Italy's rebel cheesemaker