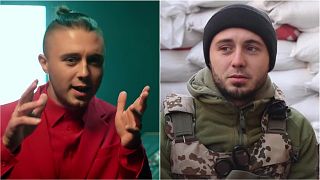 When then-comedian Volodymyr Zelenskyy appeared in the music video for Ukrainian band Antytila's 2018 single Lego, no one could have imagined the direction of their next collaboration.

Fast forward four years and Zelenskyy, now Ukraine's president, is in charge of a country at war with its neighbour Russia.

Members of pop-rock group Antytila, meanwhile, have swapped their guitars for guns and are helping to defend the capital Kyiv.

“I don’t know what would have happened to us if someone else was in his [Zelenskyy's] position now," lead singer Taras Topolia told Euronews' international correspondent Anelise Borges. “We’re proud of our president. He’s a representation of our national spirit and freedom. Not for a second over the past few weeks has he doubted that Ukraine would win.”

It is a belief the band also shares.

“There’s no way we think we will lose. We are ready for whatever," guitarist Dmytro Zholud said. “A new Ukraine is formed, and it’s been formed by us.”

Topolia said the first few days of Russia's invasion was a "shocking situation".

"No one in Ukraine expected Putin to start this scale of escalation when he started destroying civil infrastructure, factories, orphanages, industries, residential areas, maternity hospitals… and so on," he said.

"And we were awakened by war at around 5 o’clock in the morning, by explosions we could hear from Kyiv and I felt that by the second or third days [that] we got used [to] this military regime. For now, we’re into the fourth week of the war and I can say that Ukraine is on track."

The band began volunteering for the Ukrainian army in 2014 when Russia annexed Crimea and war broke out between Kyiv and Russian-backed separatists in eastern Ukraine. They went back to their music but have picked up arms since Moscow's invasion on 24 February.

Keyboardist Serhii Vusyk said the band had decided early on to say goodbye to their families and stay behind in Kyiv.

“We joined the Ukrainian army before the war," he said. "We are parents. I have three kids, Taras has three kids. Dima has a son.”

Drummer Dmytro Vodovozov and bassist Mykhailo Chyrko aren’t on the frontline. They are doing equally important work, organising supplies behind the scenes.

“We arrange everything that they need there," said Vodovozov. "We have a bank account where we gather money and buy everything that is needed for our soldiers, for our army, defence and national guard."

“Our musicians wear body armor instead of tuxedos,” says Zelenskyy