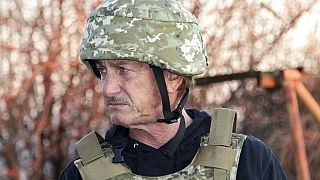 Actor Sean Penn was already in Ukraine for a documentary when the invasion began on February 24, and has since sharply condemned Putin   -   Copyright  AP/AP
By Euronews  with AFP  •  Updated: 24/03/2022

The Oscars ceremony takes place in Los Angeles this Sunday. In the run-up, Hollywood is predictably divided over whether stars ought to use the live event - which is variously broadcast, clipped and circulated around the globe to hundreds of millions - to highlight the Russian invasion of Ukraine.

There is a grand tradition at the Academy Awards of filmmakers and stars using their acceptance speeches to highlight matters of political and global import. Best Actor winner for 2016 Leonardo DiCaprio took to the stage to urge action on the climate crisis; in 2002, Halle Berry dedicated her award to “every nameless, faceless woman of colour.” On receiving his gong for Best Actor in Joker in 2020, Joaquin Phoenix launched a surreal attack on the dairy industry.

However, there is heightened sensitivity around Ukraine. "It depends a lot on how you talk about it," Scott Feinberg, awards specialist for The Hollywood Reporter, told AFP. "If we just look like we're doing a publicity stunt or giving a lesson, it's not going to go over well. But if it's sincere, that it makes sense, the result can be different.”

Other long-time Hollywood observers have been more cynical. "If I had to bet," said Clayton Davis of Variety magazine, "I'd say that almost every speech will mention Ukraine and the atrocities taking place there."

The comedian Amy Schumer will co-present the Oscars on Sunday evening. She recently suggested Ukrainian president Volodymyr Zelenskyy be invited to address the audience on Sunday “via satellite or recorded message, because there are a lot of eyes on the Oscars."

There was no formal response from the Academy of Motion Picture Arts and Sciences, which stages the awards. Schumer in turn acknowledged: “There is a certain pressure to be like 'It's a parenthesis, let people forget, we just want to enjoy the evening'."

Since the invasion began on February 24, a multitude of A-listers have weighed in on the conflict and in many cases set up their own initiatives, near-uniformly in support of Ukraine and Ukrainians.

On March 17, Arnold Schwarzenegger released a video that quickly went viral in which the Terminator star called on Vladimir Putin to end the “senseless” conflict, and informed any Russians watching that they were being misled about the contours of the war.

Sean Penn, a veteran anti-war campaigner who was in Kyiv for a documentary when Russia launched its military onslaught, has re-routed his own charity, CORE, to support refugees in Poland.

"Ukraine is the spearhead of the fight for the dreams of democracy. If we leave it to fight alone, we lose our soul as America," he said in a statement.

Ukraine-born actress Mila Kunis and her husband Ashton Kutcher launched a GoFundMe page that has already raised more than $35m to support Ukrainian refugees in Eastern Europe. They, in turn, received a personal thanks from Zelenskyy.

Many famous faces have also raised Ukraine at other events in the Hollywood film awards season. At the Spirit Awards for Independent Cinema on March 6, actress Kristen Stewart declared: “We are with the hundreds of thousands of refugees fleeing the war, both Ukrainian and of other ethnicities and nationalities.”

Presenter Megan Mullally was more forthright. “I think I speak for everyone when I say we hope for a quick and peaceful resolution... In particular, f*ck off and go home, Putin.”