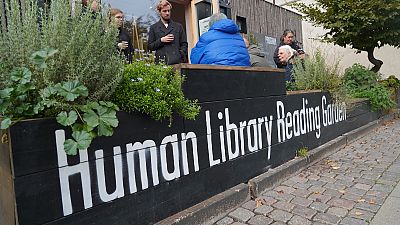 People publish their stories at a Human Library event in Copenhagen.   -   Copyright  The Human Library
By James Brooks  •  Updated: 13/10/2021

Anders Fransen’s story is a challenging one.

Both blind and hearing-impaired, he also has a rare genetic condition that reduces his ability to sweat.

“In my everyday life, it can be hard to connect with people,” said the 37-year-old. “I think they are afraid of things that are different from what they are used to.”

So, every week or so, Fransen - and his life story - gets “published”.

Denmark’s Human Library is a unique social learning platform where the books are bodies and the tales are told by the real-life characters that lived them.

“I come to The Human Library because I want to give people awareness that behind my conditions, I'm a person,” explained Fransen, who has three titles in his human catalogue, including one called ’Special Handicap’.

Founded in 2000 and first staged at Denmark’s Roskilde music festival, the Human Library has since spread to over 80 countries, with thousands of people around the world being published annually.

“We looked for people that were homeless, unemployed, depressed, had mental health issues, had certain disabilities, they could help educate us,” explained the not-for-profit’s founder and CEO Ronni Abergel.

What could be a better source to learn from than someone who has had a lived experience?

Nowadays, the charity organises thousands of volunteers, staging regular events at schools, businesses and dedicated locations around the world.

Earlier this year, organisers opened a new “book depot” in Brooklyn, New York, joining a host of locations across the United States. It’s intended to be a place where taboo topics can be discussed without condemnation, where people who would otherwise never meet can find a space for conversation.

A recent gathering in the library’s leafy Copenhagen “Reading Garden” saw local attendees given a choice from a programme of 15 potential reads; the living, breathing books had titles ranging from ‘Early Retired’ and ‘Lonely’, to ‘Sexually Abused’ and ‘Victim of Incest’.

Once they’ve selected their choice, visitors - in groups or one-on-one - have about 30 minutes to explore the book’s story. No question is off-limits, although the books might not want to answer them.

“We want the book back on time, we need it back in the same condition, you can't take it home. It's simple stuff,” joked Abergel.

The 48-year-old said that they chose the term “library” because of the neutral role they play in communities.

“Whether you're young or old, rich or poor, no matter who you are, we could all meet up there and learn,” he said.

“I like other people to know that even if you have [a] diagnosis or something bad in your life, you're still a good person,” said human book Tina Pauli, whose titles include ‘OCD’ and ‘PTSD’.

Of course, it’s often said: “Don’t judge a book by its cover,” but Abergel and the volunteers that help him stage regular events have stopped using the term.

“It's not true because we can't stop judging, so even to say the thing, it's kind of ridiculous,” he said.

Indeed, in 2006, a pair of Princeton University psychologists reported that humans make first impressions within the blink of an eye - a tenth of a second, to be precise.

Instead, emblazoned at the library’s entrance are the simple words; “unjudge someone”.

“I just discovered that there's a lot of things I didn't know,” said visitor and business student Vasco Cruz, after a long, in-depth read with one walking text.

“I was interested in the concept, especially coming from a background where these things are not normal, where society's acceptance is not there,” said 21-year-old visitor and student Anuja Bai, originally from Mumbai, India. “I think it’s better to be open about these things.”

Amidst the loneliness of modern-day life and isolation brought on by COVID-19 lockdowns, Abergel believes the library’s mission is more relevant now than ever.

A mobile app is currently in the works to connect readers with international human books around the world.

“We tend to get organised with people that look like us and do the same thing as we do,” he said. “Sometimes there'll be something on the surface which makes it difficult to identify as strongly as we would with others, but once you get underneath that, behind the cover of the book, you realise that you have a lot more in common.”

In a period when face-to-face communication has been hard to come by, many will find this connectivity valuable as well as being educational.

COVID and communication: Lip-readers struggling behind the mask