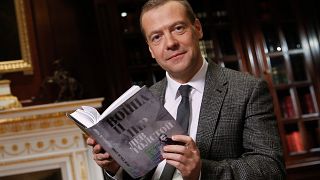 The then Russian Prime Minister Dmitry Medvedev poses as he reads Leo Tolstoy's "War and Peace" aloud as he takes part in a 60-hour marathon on national television in 2015   -   Copyright  Dmitry Astakhov/AP
By Tim Gallagher  •  Updated: 03/03/2022

On 26 February a satirical tweet claimed Oprah had removed Leo Tolstoy’s ‘War and Peace’ from her book club over the Russian invasion of Ukraine.

The author seemed to be responding to the mass banning of Russian products and media by various nations, but would it have been a mistake?

‘War and Peace’ famously covers the horrors of the Napoleonic wars, the occupation of a burnt out Moscow and a bitter retreat through the Russian countryside in the depths of winter. Is the kind of thing people would like to read in the present climate?

BREAKING: Oprah announces removal of Russian novel 'War and Peace' by Leo Tolstoy from her Book Club over Russia's invasion of Ukraine

At the start of the COVID-19 pandemic UK book chain Waterstones reported significant increases in sales of Gabriel García Márquez's ‘One Hundred Years of Solitude’ and ‘Love in the Time of Cholera,’ as well as Sylvia Plath's ‘The Bell Jar’.

All books concern either isolation or outbreaks of disease.

“People leaned into pandemic literature quite a lot. I was surprised by that,” says Dr Abigail Boucher, lecturer of English Literature at Aston University who co-ran the research project Lockdown Library.

“It tends to be common in times of high stress, the dark stuff can act as a safety valve. People think ‘I have a lot to process, can I channel this through a book where the stakes aren’t real?’”

In 2020 at the height of lockdown the world was horrified by the video of George Floyd being killed by a police officer which circled on social media.

It struck a chord with millions and sparked protests around the world, but a lesser-known fact is that it also caused a spike in book sales.

In the aftermath, Reni Eddo-Lodge’s book "Why I’m No Longer Talking to White People About Race" faced renewed popularity amongst readers and made her the first black author to top the official UK book charts.

The horrifying death of Floyd stimulated an interest in race theory that led to an uptick in purchases of 'information books'.

“There was an increase in theory,” says Boucher, whose study asked respondents about their reading habits.

“I think certainly with more time to think about these things and with all our doom-scrolling it is unavoidable.”

On the opposite end of the scale are the ‘re-readers’; those who return to old, familiar favourites in times of trouble.

“There are people who just want to hunker down and get through it,” says Daniel McLoughlin, research director at WordsRated.

Whatever the genre, during the pandemic books sales all over Europe went up. In Holland there was a 6 per cent increase in 2020 and in 2021 Germans bought 3.2 per cent more books.

However, the Lockdown Library project showed a snag; while people had more free time to read the quality of that time was lower.

“In general before the pandemic reading was an activity you do when you have peace and quiet,” says McLoughlin.

“What’s happened during the pandemic is you have kids in the house, partners working from home, all that buzzing around in the space.

Whatever people were reading while they had one eye on homeschooling their children, the pandemic built on a rich tradition of using literature to understand the era we live in.

“There were anxieties around scientific advancements in the Victorian era,” says Boucher.

“There were anxieties about things that would take us back into this world which is quasi-medieval or tribal.

“People were dealing with Darwin and freaking out really.”

Europe’s top nations for reading are Estonia followed by Finland, with Poland coming in a close third. Sadly these nations have either been directly threatened by Putin or are former Soviet territories that stand a chance of invasion.

The war in Ukraine presents a new frontier for bookworms, and while Oprah is still recommending ‘War and Peace’ readers can choose for themselves whether to learn about geopolitics or escape with a childhood classic

“I see a parallel between this and the pandemic,” says McLoughlin.

“There will be these people who go into re-reading books to get away from the news cycle and there will be explorers who throw themselves into trying to learn as much as possible.”