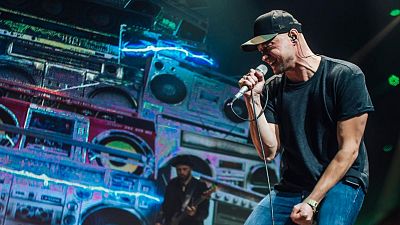 He put his children in the car on Thursday morning and headed out of the capital city, away from Kyiv.

"I'll take my kids to a safe house, to granny's. And then I'll return to follow the instructions of the government and if it's needed I'll take my gun and go fight for my country" he tells Euronews.

With a string of hit albums behind him, and more than 100 million YouTube views of his music videos, the lead singer of BoomBox finds himself in the same situation as many other Ukrainians after the start of the Russian military assault: apprehensive but resilient.

"They bombed us" he says. "But what I hear now is complete support from everywhere, from everyone who knows me and listens to my music."

Khlyvnyuk says all of his friends are leaving their kids in safe places and getting together to join the army.

"Musicians are peacemakers," he states, but "now it's not time for playing guitars. It's time to take the rifles."

BoomBox perform in Ukrainian, Russian and English but since Russia annexed Crimea in 2014, they've refused to play gigs in Russia.

Musicians played a headline role promoting peace during the latter half of the 20th century, from Bob Dylan, Joan Baez, Pete Seeger and Nina Simone singing anti-war songs in the Vietnam era; to the range of artists using their music to highlight conflicts and injustice from Latin America to Europe and the Middle East.

The Moscow Music Peace Festival of 1989 gathered acts like Bon Jovi, Ozzy Osborne, The Scorpions and Mötley Crüe for a massive concert, held over two days at a stadium in Moscow, the first event of its kind in post-Glasgnost Russia.

And arguably the most iconic images of anti-war protests by musicians are from a series of 'Bed-Ins for Peace' staged by John Lennon and Yoko Ono in the US and Canada in 1969.

The time for music protests is over

This week in Ukraine however, musicians say the time for musical protests is over as the nation woke to the harsh reality of air raid sirens and conflict on their doorstep.

"How can there be concerts now, under bombs and cruise missiles?" asks Oleksandr 'Fozzi' Sydorenko, the founder of Ukraine's most successful hip-hop group TNMK, whose videos have been viewed millions of times on YouTube.

"Russia went to war against us like Hitler, early in the morning. How can this be in Europe in the 21st century? Explosions in Kyiv, troops are landing nearby."

"NATO must help us urgently by closing the airspace, as they did in Georgia in 2008. Urgently."

Playing an acoustic set in Kyiv

At the start of the week, there was still some hold-out hope for a diplomatic solution to the crisis, and a de-escalation on the part of Russia.

That's what brought rock band Elza's Ocean to the centre of Kyiv on Tuesday.

More used to playing to crowds of 70,000 people at Ukraine's biggest stadiums, the musicians played a small acoustic set for fans.

"It was a time when we needed to raise the mood of people, but that was two days ago. Today it's a real war and probably it's time not just for signing, it's time for fighting. But you can also fight with words," lead singer Sviatoslav Vakarchuk tells Euronews.

The conflict, he says, has the potential to be as deadly as WWII, and adds that Ukrainians just want to be a free, European nation.

"They punish us just for having our own agenda, our own desires, and certainly we will fight," says Vakarchuk.

"I want to ask everybody to be loud, and yell about everything that happens today."