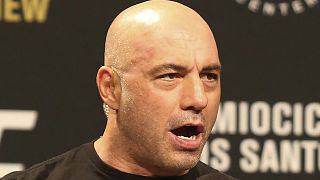 If you are Spotify user, and wanted to listen to Joe Rogan this Monday morning, you would have been left disappointed. The podcast, entitled 'The Joe Rogan Experience' simply wasn't there. Again.

But now it's back up. Is a pattern forming?

The show disappeared briefly on Friday but this was addressed by Spotify, who cited a technical issue.

But on Monday there was no way to find the podcast on apps or web player.

Various users across the globe began to report their inability to find it, but there appeared to be conflicting accounts.

But the team here at Euronews Culture confirmed that it was all back up by 1120 CET.

Another tech glitch for the same controversial podcast?

The show has been at the centre of a controversy that rambles on after Neil Young's demand to not share a space with Rogan ended in the removal of his material from the streaming service. And Young was not alone.

We await the statement.