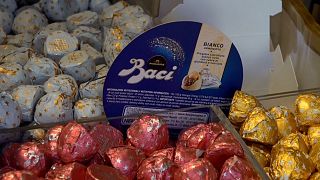 If you've ever delighted in the taste Italian chocolates wrapped with a little love note, it was probably 'Baci'.

The world's Valentine's Day favourite is celebrating its centenary in 2022.

Meaning 'kisses' in English, Baci were created in 1922 in Perugia, Italy by Luisa Spagnoli, a confectionary entrepreneur.

The company that produces them, Perugina, largely attributes their success to her creativity and ambition.

After all of these years, the chocolate's recipe remains the same: dark chocolate, gianduia, chopped hazelnuts and crowned with a whole hazelnut.

Unless, of course, you're in the market for a limited edition 100-year-anniversary chocolate, courtesy of Dolce and Gabbana.

Delicate yet indulgent, the fashion house has collaborated with Perugina to create a celebration collection with a limited edition recipe, which has a lemon-flavoured centre, coated with white chocolate.

A chocolate love story with a rich history

According to Perugina, which was sold to Nestle in 1988, Spagnoli set her sights on creating a new chocolate with a unique shape, which she thought looked like the knuckle of a clenched fist.

At first she called it 'Cazzotto' (meaning 'punch' in Italian).

Her life companion, Giovanni Buitoni, owner of the Buitoni pasta company, thought the name was inappropriate.

"Can you imagine", he allegedly said to Luisa, "going into a shop and asking the shop assistant for a punch?".

He proposed a more romantic name, and the chocolates were called 'Baci', meaning kisses.

Spagnoli's creativity and ambition set the wheels in motion for a bonafide Italian treasure.

This was the beginning of what was to become a fascinating story of one of the world's best-known food-based romantic gestures.

That being said – Baci's famous love notes weren't her idea and the chocolates didn't originally come with them.

A few years after the birth of the Baci, Federico Seneca, Perugina's art director at the time, decided to include something unique in the wrapping paper the chocolate had become famous for.

To this day the little love notes remain, translated into several languages.

Spagnoli was a true pioneer in confectionery

Spagnoli not only invented Baci, but also went on to create her own fashion house bearing her name and one of the big names in Italian fashion.

"The role of Spagnoli is an extremely dynamic one, a pioneer of what will become female entrepreneurship," says Cristina Mencaroni, Director of the Perugina Historical Museum.

"It was already strange to find a woman sitting on the board of a company let alone finding one who looked after the innovative aspects, the recipes, the products, the activity concerning the products, but she was an ingenious entrepreneur with a very modern spirit."

Millions of chocolates produced each year

Perugina's factory produces many brands, including 'Kit-Kat', but none more famous than the hazelnut treat – 80 million are individual chocolates are created annually for worldwide consumption.

"Production goes on for six-seven months a year so you can imagine how many arrive to our consumers," explains factory director Marco Muratori.

Meanwhile, the chocolate is a huge aspect of life in Spagnoli's native Perugia. There are stores to explore and even a restaurant called 'Bacio' on the high street of the charming hilltop town.

Although not exclusively for lovers, Baci is hoping the oldie-but-goldie will pack a punch, and maybe a kiss, this Valentine's Day.

Check out the video above to learn more about the chocolate's 100th birthday.